One of the common threads of most denier rants on recent temperature change is cherry picking 1998 as the start of their analysis.  This is a dead giveaway that they either are clueless about basic statistics or are being dishonest.  The fact is that 1998 was a highly anomalous year. A strong el Niño effect pushed temperatures to unprecedented levels, and that fact makes it useless as a baseline from which to analyse temperature trends as the fowling graph makes clear. 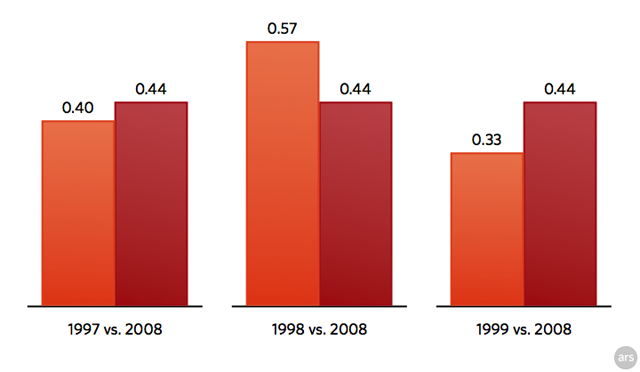 All the numbers indicate how much warmer that year was than the mean temperature from the 1950-1980 period. The data should make clear that, to get a drop in temperatures using that measure, you need to pick 1998 as your starting point; neither of the two neighboring years will work.

Of course that wont stop people from claiming that global warming stopped in 1998. Any analysis that falls apart by moving the starting year around a bit isn’t simply valid, and isn’t an honest look at the data. Someone who was interested in an honest look would present something like this: 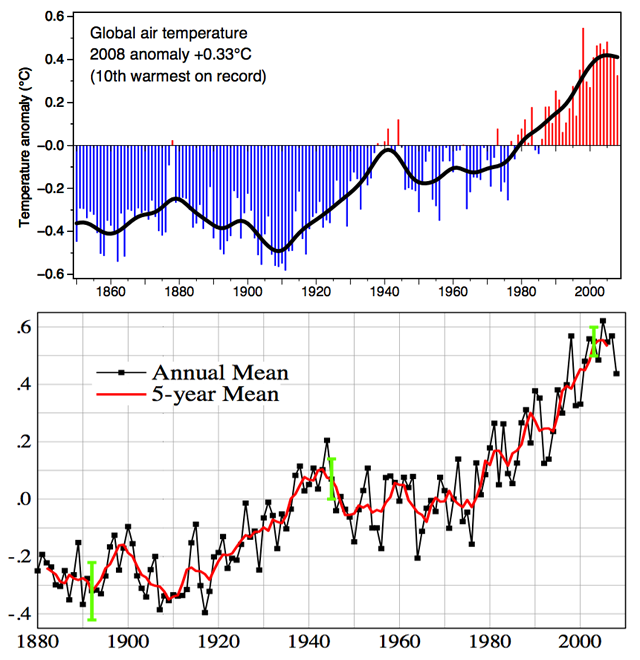 The top graph comes from CRU, and the bottom one comes from GISS.  What is clear is that despite a relatively cool 2008 (almost certainly attributable to la Niña) temperatures are still well above normal.  In both data sets the temperatures of 2008 combine with several years of largely similar data to create a slight drop in the trend, however a quick look at the data shows similar drops in the past, thus making this drop nothing extraordinary, nor inconstant with AGW theory . In fact such short term drops are completely expected, since the large yearly variability in weather is larger that the estimated climate change signal and can thus temporarily overwhelm it, and some new preliminary models show just that.

Could the current drop signal the end of global warming.  While not likely given what we already know, it is possible. But we wont know until we see long term evidence of a cooling trend, which would take at least a couple of decades. Until then, anyone who says otherwise is lying or ignorant and should be ignored.