Whenever I mention the scientific consensus on climate change I get plenty of people pointing to opinion pieces or blog posts written by people who clearly do not agree that a consensus exists.  Of course it is obvious that not everyone accepts the consensus, but it is clear that within the scientific community there is a broad acceptance of the consensus. In fact a recent poll shows that 97% of climatologists agree that humans are causing climate change. The figures drop off a little for non-climatologists, and climatologists who are not active publishers in the peer-reviewed literature but still just bellow of 90% agree with the climatologists.

Do you think human activity is a significant contributing factor in changing mean global temperatures? 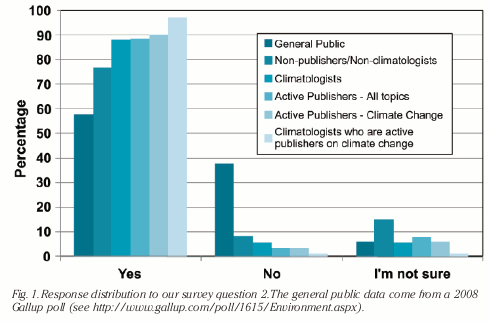 What is striking (and worrying) is the divergence between scientists and non-scientists. While roughly 90% of scientists (and 97% of climatologist) agree that human activity is having a significant effect on the climate less than 60% of the general public agrees.

Obviously not everyone accepts the scientific consensus, but is should be abundantly clear to anyone that an overwhelming majority of scientists do accept it, and thus while a debate on climate change is taking place it is a decidedly non-scientific debate taking place outside the scientific community.  Those studying the issue in a scientific capacity  have looked at the data and have all arrived at more or less the same conclusions… hence the consensus.

2 thoughts on “Where is the debate on climate change taking place?”