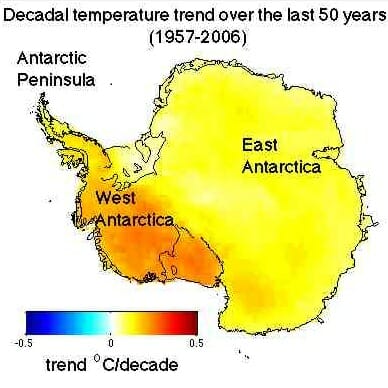 Recently an article was published in Nature which came to the conclusion that despite an earlier belief Antarctica has not been cooling, but rather warming. Given that deniers use the possibility that Antarctica may have been cooling as ‘proof’ of that climate change is a farce, many now predictably refuse to accept the results of this study, and have fallen ill with ‘Antarctic warming derangement syndrome‘

Assessments of Antarctic temperature change have emphasized the contrast between strong warming of the Antarctic Peninsula and slight cooling of the Antarctic continental interior in recent decades… This picture, however, is substantially incomplete owing to the sparseness and short duration of the observations. Here we show that significant warming extends well beyond the Antarctic Peninsula to cover most of West Antarctica, an area of warming much larger than previously reported. West Antarctic warming exceeds 0.1 °C per decade over the past 50 years, and is strongest in winter and spring. Although this is partly offset by autumn cooling in East Antarctica, the continent-wide average near-surface temperature trend is positive.

Real Climate has a good layperson write up that I recommend everyone read because the picture emerging from Antarctica is full of nuance that can and will be exploited (either intentionally or not) by many in the media.

Of relevance to this post and the ‘Antarctic warming derangement syndrome‘ is how robust these results are.  Obviously a network of weather stations like we have here in Canada, and in the US would produce results with more robustness, but that is simply not practical for a remote and inhospitable place like Antarctica.  But this doesn’t mean that we can’t get good picture.  In fact the results of this study have been confirmed by:

independent data from automatic weather stations, as shown in our paper as well as in updated work by Bromwich, Monaghan and others (see their AGU abstract, here), whose earlier work in JGR was taken as contradicting ours. There is also a paper in press in Climate Dynamics (Goosse et al.) that uses a GCM with data assimilation (and without the satellite data we use) and gets the same result. Furthermore, speculation that our results somehow simply reflect changes in the near-surface inversion is ruled out by completely independent results showing that significant warming in West Antarctica extends well into the troposphere. And finally, our results have already been validated by borehole thermometery — a completely independent method — at at least one site in West Antarctica (Barrett et al. report the same rate of warming as we do, but going back to 1930 rather than 1957; see the paper in press in GRL).

Suffice to say the results are quite robust, even with the small error that has been discovered in the data, which did not affect the results in any significant way.

Deniers who have long used the possibility that Antarctica as ‘proof’ that climate change is bunk now have a serious problem on their hands.  First of all Antarctic cooling (if it is even happening) doesn’t disprove climate change.

Observing slight cooling in a region when you expect slight warming is not necessarily an indication of trouble with your understanding of the physics involved or with construction of the models. It could simply reflect the high degree of uncertainty in the data and the high degree of natural variability, especially in regional or short term averages…

The issue boils down to a bunch of semantic quibbling about what it means to be “consistent with” a climate model, and really hinges on the fact that it takes decades of quality observations to determine how well your model is performing.

Of course this point has been wildly misrepresented by deniers who propose inadequate tests to determine the validity of AGW theory and the complain when people point out why such test are inadequate.

But now that Antarctica has been shown to be warming, according to their own test (inadequate as it may be) climate change must now be real.  Obviously true deniers cannot admit to that and thus they begin to develop what frankbi over at the International Journal of Inactivism calls the ‘Antarctic Warming Derangement Syndrome’.

The most basic case is exhibited by someone who we all expected to have fallen ill with this syndrome: Mark Morano. He is now claiming (or at least linking to people who are claiming) that “It is hard to make data where none exist”.  Funny, that didn’t stop Morano from claiming that the Antarctic has been cooling and using that as ‘proof’ that AGW is a fraud. But consistency is not something denier cranks like Morano are known for.

The Heartland institute also fell victim to this syndrome saying:

Adding to the dubious nature of the study’s conclusion is the authors’ self-interest in silencing an embarrassing mountain of raw temperature data that contradict the authors’ global warming theory.

Obviously the guys at the Heartland Institute didn’t bother to read the study which answers their main point of contention, but instead prefer to simply assume (they certainly provide no evidence) that this is all just a massive conspiracy.

Some people like Meteorologist Ross Hays (and Anthony Watts who has yet to post a correction on this site) just resort to bald-faced lies. Despite what Ross Hays claims he doesn’t have much (if any) relevant experience, summer temps at McMurdo Station are increasing (the trend is not statistically significant, though the trend for all months is both warming and significant), and December 2006 is nowhere near the “coldest December ever for McMurdo Station.

But perhaps the funniest manifestation of the Antarctic warming derangement syndrome is Rick Hodgin who blames the warming trend on a massive (yet undetectable) volcano.

It stands to reason that if there is an active volcano in Antarctica, one capable of punching a hole through the ice sheet and spewing “a layer of volcanic ash and glass shards” over 23,000 km2 at some point, then it (and its nearby possibly as-of-yet-unidentified brothers) may well be the cause of a one degree Fahrenheit increase observable in the western section of Antarctica over the past 50 years.

Does it stand to reason? No not at all. Wouldn’t we detect such a massive eruption?  I mean we can find evidence of a similar eruption that happened over 2000 years ago! I think we might notice ash clouds covering 23,000 km2.  Or perhaps Hodgin wants us the believe that all our fancy satellites and  Antarctic research stations were looking the other way. And what about seismometers?  Certainly they would have detected the rumblings of a massive eruption. Not a peep from them.

Of course the bigger question is how is a volcano supposed to cause a gradual increase in warming over decades after the eruption?  He doesn’t bother to explain that.  How does he explain the increase in temperatures seen thought the continent?  He doesn’t instead he lies about it.

Also, if you look at the location of the warming, it is contained in the western region by the mountain range, indicating the warmer air comes from a local source and not a global phenomena to the entire continent.

That statement doesn’t square with what we already know.  As evidence to back up this claim he presents the illustration to the right, but omits one crucial detail: the legend. Thus making it appear that only the red zone is warming. Perhaps he is taking lessons from Monckton?  Of course once we see the legend it is painfully clear that Ross Hodgin is lying.  East Antarctica (aka the yellow zone) is also in fact warming, though at a slower rate than west Antarctica (aka the red zone).

And to make matters worse he uses the standard claim that we simply don’t have enough data to make any predictions.

here’s just too short a data set for us to be able to draw any conclusions as of yet. If we had 500 years worth of charts, then I might feel more comfortable with analysts pointing out trends.

As Greenfyre, points out there are at least three things grossly wrong with this statement.

Hodgin then ignores his magical undetectable volcano and places the blame squarely on the sun. (not that again).  So which is it, Hodgin?  A magic invisible volcano or the fully debunked sun theory? Apparently he cannot even keep straight which nonsense he is trying to push in the piece.

Antarctic warming derangement syndrome is dangerous and can affect people from all walks of life, while no know cures exists it is possible to point and laugh at these pathetic individuals and in doing so alleviate some of the pain these people have caused.