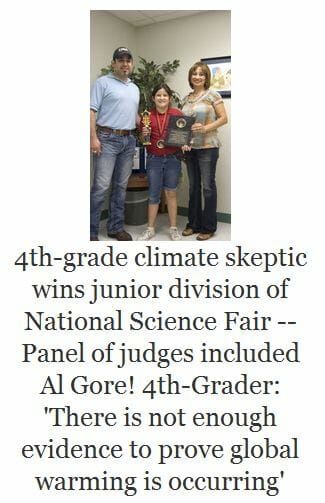 It’s over. Global warming has been torn to shreds. Utterly disproven. But by who?

It has to be someone who hasn’t yet been corrupted by the overwhelming evidence supporting anthropogenic global warming, so that excludes most people outside the denialism community. But having global warming disproven by a denialist isn’t that exciting. It happens at least once a week.

That’s right deniers are jumping over themselves because global warming was questioned by a 4th grader. Throw out the decades of research done by thousands of brilliant scientists because a 4th grader says it is all wrong.

These are her conclusions:

I have to admit, that is impressive for a 4th grader, and maybe she did deserved to win the science fair. But to think that an entire discipline of science can be overturned by a 4th grader’s science experiment betrays the irrationality of the denier movement.

Look at her conclusions. They don’t tell us anything new. We know with a good deal of certainty what happened to global temperatures between 1900 and 1950 (there existed a warming trend). I am not sure what happened locally in Beeville from 1955 and 1975, but that period broadly coincides with the mid-century cooling, thought to be caused mostly by aerosols, and well replicated in computer models. Again since 2001 I don’t know what happened to local temperatures in Beeville, but even if there has been cooling it doesn’t do anything to disprove global warming.

First of all trying to disprove global warming by using local trends is nonsensical. And any trend since 2001 (especially a local trend, but even a global trend) is too short a period of time to determine anything about climate change. And keep in mind that the 2000s was the warmest decade on record. The global record does not agree with the local record in Beeville, as presented Castillo, which highlights the foolishness of using it to draw conclusions about the global trend.

The bottom line is that a 4th grader’s science fair project is not a challenge to the established science of global warming. Climatology is a complex science, and a 4th grader simply doesn’t yet have the capacity to truly understand it. That deniers are promoting this shows how desperate they have become.

Nothing but grasping at straws.

UPDATE: And it looks like this story is fake:

The original source appears to be a newspaper in South Texas, which published a preliminary article on the project a few months ago. But as for the claim of winning the junior division, where are all the other newspapers in Texas, which would presumably jump on a story like this? All that I can see is we have a few blogs copying the same information. And the article about Castillo winning the junior division carried no byline. That’s very unusual for news articles. Who wrote this?

When you see a story making a startling claim, with few sources or only one, and no links or means to verify the claim, be extremely skeptical.

The project looks real enough, but the story of her winning the National Science fair looks to be bogus.

UPDATE 2: Michael Tobis has received word from the Reporter who first published the story:

I did speak with a representative from NSF who confirmed that they do not have a National Science Fair, no one there had ever seen the letter, and I also called space camp, who told me that they did not receive anything from NSF either.

And the NSF that the letter sent to Castillo declaring her the junior grand champion was fraudulent:

Linda Slakey forwarded your message to me. We became aware of this
yesterday through an article in the Beeville, TX newspaper, and have
referred this matter to our Office of Inspector General.

The letter is not authentic, Linda had no knowledge of it, and it
amounts to fraudulent use of our name and logo.

We appreciate your concern about it.

Which of course begs the question “What sort of person would manipulate the emotions and expectations of a ten-year-old girl in this vile and crass way for a small political point?”

UPDATE 3: The answer to the question is unfortunately the girls father. He has admitted to being behind the hoax.

More interesting is the chart produced by Zeke Hausfather‘ that demonstrates how this lie spread around the internet:

I do have to mention that in some versions of the chart, my site is not labelled as being sceptical of the story. I am not sure which version is the most recent.  But I think it is fair to label my post not initialy sceptical. Despite that fact that I was aware of some initial suspicions from people who know more about American science fairs than I do, I went ahead and wrote about this regardless.

Was that the right thing to do? I don’t know.

But the focus of my post was different than most. I didn’t really care whether or not this story was true, I was more interested in the fact that even if it was true, it still made no sense for people who claim to be interested in promoting sound science (as deniers claim to be) to promote this. What does a 4tth grade science fair project have to do with the scientific case for global warming?

Nothing of course. Those who were promoting this were doing so for political, not scientific reasons.

12 thoughts on “Global warming proved false by a 4th grader”