Both NOAA and the WMO have said that 2000-2009 is the hottest decade on record (actually they said ‘will be’ since the decade is quite over yet, but it would take a truly extraordinarily cold December to change anything). the 2000s was warmer than the 1990s which in turn beat, beat out the 1980s.

Tamino puts it this way:

Here’s global temperature data from NASA GISS before the 21st century, for the time span 1975 to 2000: 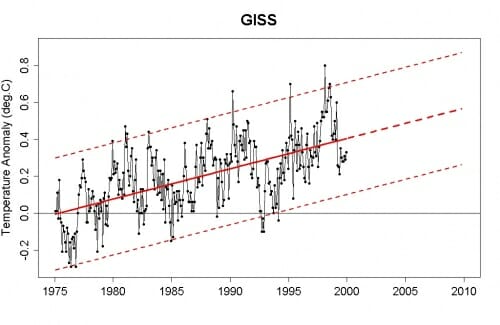 I’ve computed and plotted a trend line using linear regression. In addition, I’ve plotted dashed lines two standard deviations above and below the trend line — we expect most of the data to fall within these dashed lines. Finally, I’ve projected those lines out to the present day. 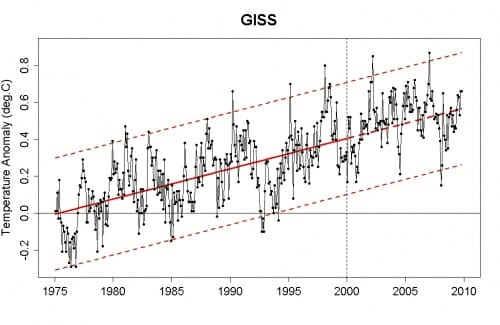 Gosh. What actually happened is exactly what was expected. Exactly. By mainstream climate scientists. You know, those folks who keep telling us that human activity is warming the planet and that it’s dangerous…

This is undeniable. Unless of course you’re in denial.

Tamino also does the same analysis using both RSS and, the denier favourite, UAH satellite datasets and arrives at the same conclusion.

Now can the ‘no warming over the past decade‘ myth finally die?