Yes stupider is a word. Don’t believe me? Look it up. 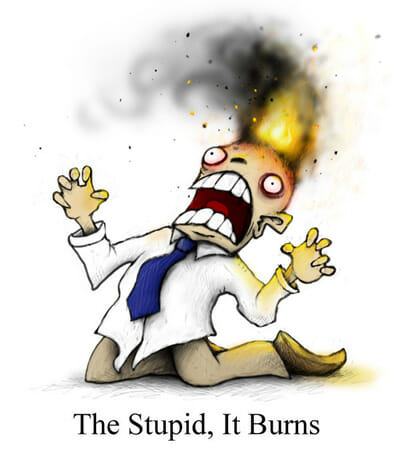 Lately global warming deniers have been really scraping the bottom of the barrel with their arguments. Sadly none of this is an April fools joke.

First up to bat is William Happer who argues that really the earth is in a CO2 famine because 80 million years ago there was more CO2 in the atmosphere.  Yes you heard that right.  Of course what Happer doesn’t mention [I wonder why?] is that 80 million years ago sea levels were roughly 170 meters higher than they are today.

What does a sea level rise of 170 meters look like? The dark blue areas represent the flooded areas. And yes many of those areas are very densely populated. 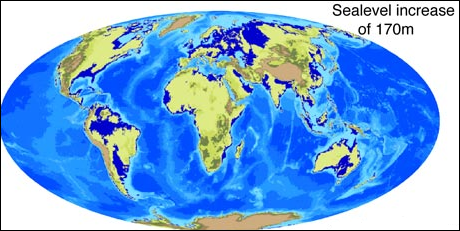 But don’t worry I am sure the hundreds of millions (billions?) of people living in coastal areas wont mind a living underwater.

Of course that doesn’t even begin to tackle the fact that the many ecological reasons why Happer’s argument is absurd.

Next up is David Bellamy, who openly states that “peer-reviewed journals – it’s the last thing I would use now.” In one fell swoop he completely dismisses the entire scientific establishment.  But if he wont trust peer-reviewed journals who will he trust?  I humbly suggest he trust me, and my writings here on this blog; he could do a lot worse. Of course Bellamy also used a non-existent data set, embraced the claims of unqualified cranks, ignored an entire canon of science and relied on fraudulent data. But if that is not enough, he also thinks that the last ice age ended 150 years ago. In actual fact it ended roughly 10,000 to 15,000 years ago.

Next up is Rep. Joe Barton (R-TX) who suggested that humans can adapt to global warming by finding some shade:

I believe that Earth’s climate is changing, but I think it’s changing for natural variation reasons. And I think man-kind has been adopting, or adapting, to climate as long as man has walked the Earth. When it rains we find shelter. When it’s hot, we get shade. When it’s cold, we find a warm place to stay. Adaptation is the practical, affordable, utterly natural reflex response to nature when the planet is heating or cooling, as it always is… Adaptation to shifts in temperature is not that difficult.

Brilliant! But that is not all, he also cited the work of the potty-peer himself: Lord Monckton. And what is Monckton’s expertise in the are of climate science? Absolutely none. And I thought it was absurd when Michael Crichton testified to the US senate.  At least he has a science background. Monckton’s education is in journalism.

Last up to bat is Rep. John Shimkus (R-IL), and he definitely hit a grand slam.  First he asserts that

The earth will end only when God declares it’s time to be over. A man will not destroy this earth. This earth will not be destroyed by a flood. And I appreciate having panelists here who are men of faith and we can get into the theological discourse of that position. But I do believe that God’s word is infallible, unchanging, perfect. Two other issues Mr. Chairman. Today, we have about 388 parts per million in the atmosphere, I think in the age of the dinosaurs, where we had the most flora and fauna, we were probably at 4,000 parts per million. There is a theological debate [???] that this is a carbon-starved planet, not too much carbon.

Got that?  Don’t worry about about the increase of sea levels due to the massive increase, because God promised not to destroy us with a flood. I imagine that is small comfort to the people of Fargo, who just witnessed the second hundred-year flood in the past 12 years.

But that isn’t enough for Shimkus, who (presumably with the help of Barton) got Monckton to testify at the House Energy & Commerce Committee:

Ah yes, the whole CO2 famine argument; Happer’s claims are already starting to echo.  But Monckon’s example is even worse than Happer’s. Monckton cites the Cambrian period, which ended 480 million years ago! Of course it should be obvious that things have changed considerably since then, perhaps most drastically here on land, where there now exists a diverse and abundant community of flora, while during the Cambrian period there were no land plants. Oh and sea levels were 30 to 90 meters higher than they are today. Not exactly a comforting reference at a hearing about the possible impacts of climate change.

Given that it is absurd that Monckton and Shimkus next go on and state that CO2 is plant food (CO2: they call it pollution; we call it life).  Of course while CO2 may have some beneficial properties for some plants, the situation is ultimately anything but certain. Or in short ‘Too much of a good thing is a bad thing’.

But for those of you still worried, relax. No one wants to remove all the CO2 from the atmosphere, at most all we want is to return CO2 to levels comparable to those that have existed for that past several thousand years; there will still be more than enough CO2 for plants.

As pointed out by PZMeyers:

The concern with global warming is change that will cause economic disruption and environmental disturbances and damage to places we like…like cities. Honestly, if nations collapse, we know that algae will still thrive. We just happen to generally take the side of humanity.

UPDATE: Not wanting to be left out of the absurdity Senator Inhofe asked the question “If global warming is real, why did it snow in Oklahoma in March?”

Everyone please point and laugh at the idiot.