The Gravityloss blog has an excellent post on how deniers can, and do, effectively assassinate the truth.

You have now achieved to drag the original position into the mud, by arguing against it as dishonestly as possible.

If all of the above is exposed, just continue to fight from the second phase, recursively. In the end, you can take your hands off and the confusion generator continues to spin on its own. 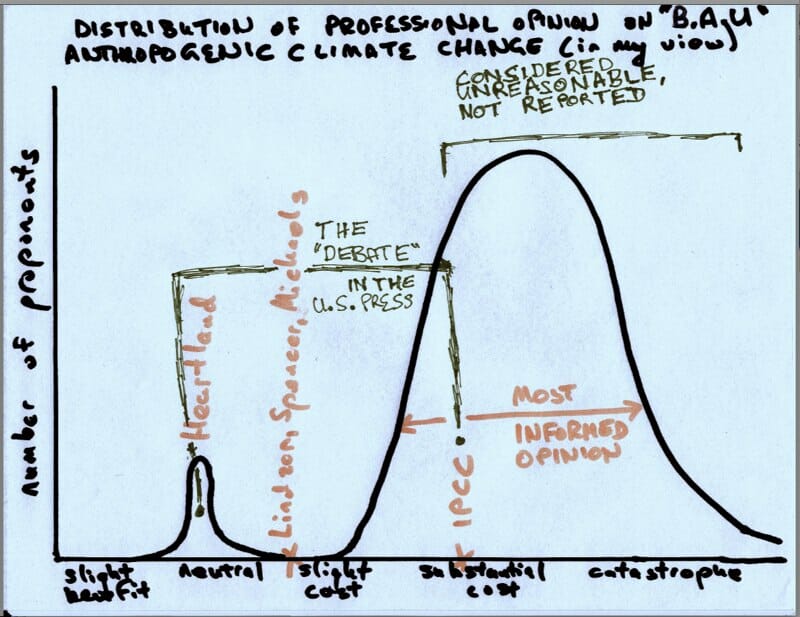 And as a bonus Mark Hoofnagle from the Denialism blog has a great article in the Guardian on the denialism tactics used by deniers to confuse the general public.

We have identified five routine tactics that should set your pseudo-science alarm bells ringing. Spotting them doesn’t guarantee an argument is incorrect – you can argue for true things badly – but when these are the arguments you hear, be on your guard.

• First is the assertion of a conspiracy to suppress the truth. This conspiracy invariably fails to address or explain the data or observation but only generates more unexplained questions.

But let us think about such conspiracies for a moment. Do they stand up to even a cursory evaluation? Is it really possible to make thousands of scientists, from over 100 countries, and every national academy of every country toe the same line, falsify data, and suppress this alleged dissent? I certainly didn’t get the memo. At the heart of all denialism are these absurd conspiracy theories that require a superhuman level of control of individuals that simply defies reality.

• The second tactic is selectivity, or cherry-picking the data. Creationists classically would quote scientists out of context to suggest they disagreed with evolution. Global warming denialists similarly engage in this tactic, harping on about long discredited theories and the medieval warming period ad nauseum. But these instances are too numerous and tedious to go into in depth.

But don’t look too close! Lots of his big names are the same hacks who used to deny that cigarettes cause cancer for the tobacco companies, others are scientists who are wrongly included because they said something that was quoted out of context, others simply have no credibility as experts on climate like TV weathermen. But the desire of denialists to gain legitimacy by the numbers of scientists (or whoever they can find with letters after their name) used remains despite their contempt for the science they disagree with.

• The fourth tactic – moving goalposts or impossible expectations – is the tendency to refuse to accept when denialists’ challenges to the science have been addressed. Instead, they just come up with new challenges for you to prove before they say they’ll believe the theory. Worse, they just repeat their challenges over and over again ad nauseum.

This may be their most frustrating tactic because every time you think you’ve satisfied a challenge, they just invent a new one. The joke in evolutionary biology is that every time you find a transitional fossil all you do is create two new gaps on the fossil record, one on either side of the discovery. Similarly with global warming denialism, there is no end to the challenges that denialists claim they need to have satisfied before they’ll come on board.

It’s important to recognise that you shouldn’t play their game. They’ll never be satisfied because they simply don’t want to believe the science – for ideological reasons. In the US, global warming denialism usually stems from free-market fundamentalism that is terrified of regulation and any suggestion there should be control of business.

• Finally, the fifth tactic is the catch-all of logical fallacies. You know you’ve heard them. Al Gore is fat! His house uses lots of energy! Evolutionary biologists are mean! God of the gaps, reasoning by analogy, ad hominem, you name it, these arguments, while emotionally appealing, have no impact on the validity of the science.

It is important to filter information so that scientific discourse and debate can stay within the confines of rational argument and reason. Otherwise we get sidetracked and paralysed by denialists who are not honest brokers in a debate. Their goal isn’t to promote science, or truth, or human knowledge, but to delay and deny.

Given the tactics outlined by the Gravityloss Blog and Mark Hoofnagle, and the few people in the media who feel the need to call people out for using such tactics, is it any wonder why a disconnect exists between the public and the scientific positions in regards to climate change?