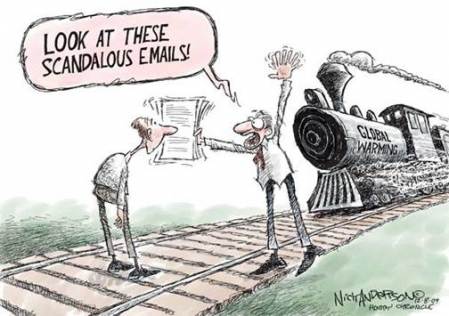 Here we go again. Just like in 2009, on the eve of a major UN climate conference some hacker or group of hackers released a bunch of emails illegally obtained from a server belonging to the University of East Anglia’s Climatic research unit (CRU), with the hopes of derailing the UN talks, or at least creating uncertainty about climate science amongst the public. The incident in 2009 was termed climategate, and although it caused much uproar at the time —the media loves a controversy and played it up for all it was worth— the string of inquiries that came out of the climategate incident showed that the scientists involved had done nothing wrong.

The aims of these email hacks may be plainly transparent but, at least last time, they were successful. Not in overturning any climate science, but in raising doubts the public’s mind.

It is worth repeating same sentiment I had in 2009 after the original emails were hacked. If you are alleging that climatology is flawed then the proper response is more science not hacked emails. Emails, regardless of what they might say, do not have the capability to overturn decades of climate science done by thousands of individual scientists.

This point was made abundantly clear in the months following the email hack when a string of inquiries exonerated all the scientists involved:

The investigation done at the request of Senator Inhofe is the most interesting to me. Not for any scientific reason as I doubt the Inspector General at the Department of Commerce is the most qualified person to pass judgement on such matters, but because presumably Senator Inhofe picked the venue most likely to be sympathetic to his (obviously wrong) opinions of what the climategate emails revealed. And even they were unable to dig up any dirt on the scientists involved.

More importantly in the two years since the climategate emails were stolen and released to the public no single scientific institution has changed it’s stance on the issue. In fact no scientific body of national or international standing rejects the notion of  human caused climate change.

You know how the old saying goes: “Fool me once shame on you, fool me nine times shame on me”.

So what about these new emails? Do they reveal anything new? The first thing to note is that these emails are not new. They are all from the same period of time as the original emails, and involve mostly the same scientists, so if you have been paying attention you might be very tempted to say no, they don’t.

And you would be right, as far as the scientific relevance of the emails. But I think they do reveal something very important about the way scientists communicate with each other. Take a look at this email written by Raymond Bradley:

I’m sure you agree–the Mann/Jones GRL paper was truly pathetic and should never have been published. I don’t want to be associated with that 2000 year “reconstruction”.

Bradley was one of the authors of the original hockey stick graph, along with Michael Mann. But he clearly thinks that a subsequent reconstruction (which largely agrees with his own) done by his former collaborator is not very good. He says so in very strong language, and when asked about it by the New York Times he stood by his earlier complaints and made it clear that he expressed his disagreement directly to Michael Mann.

This example, and many more contained within the emails, show a healthy skepticism within the scientific community. Results from colleagues are not automatically accepted, and vigorous discussions using very harsh language about the validity of new research papers is common amongst climatologists.

So if they are willing to call the work of highly respected scientists and close colleagues pathetic, it should come as no surprise that when talking about the work of, shall we say less than respected people who take every opportunity to turn molehills into mountains, the language is at least equally strong and harsh.

Last time the media pumped up the supposed controversy without bothering to check if the controversy was legitimate or manufactured, and as the string of inquiries found that the scientists had done nothing wrong it became clear that they were made to look like fools. This time around the media is displaying, much like the scientists in the emails,  a healthy dose of skepticism, realizing that these emails are nothing more than a distraction from what really matters.

7 thoughts on “Of emails and scientific research”