To get to Pakse (where we are now, in Southern Laos) we had the most hellish travel day of the entire trip… well maybe Death Hwy was worse… but this was longer.

The day started out at 4:30 am when we were awakened by a large storm. Lightning was so frequent that the sky was not dark for more than a split second. The wind was howling, and the rain was pounding… The storm passed about 45 minutes before breakfast

Our travels started out after breakfast as a two hour motorized canoe ride. The seats were wooden planks that were far to slim to provide any comfort, and we frequently had to get out and push the canoe over shallow sections of river. Thankfully there was no sewage sludge in the sections we has to wade.

The plan was to be picked up by a Sawngthaew, but the morning storm made the roads impassible and the Sawngthaew did not show up. Instead of a Sawngthaew we took a tractor; or at least what passes for a tractor in these parts. 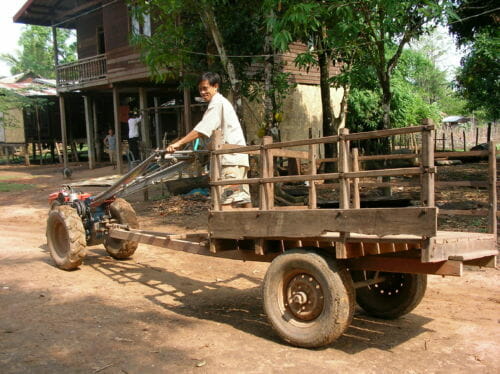 It’s really only a trailer with a motor attacked to it. Bumpy and shock-free; an hour of this will make any one’s tail bone sore.

Now we were at Ban Na Hin only 1 hour away by Sawngthaew to the main Hwy. That Sawngthaew ride was probably the best part of the voyage, and it was crammed with over 20 people countless empty cases of Beer-Lao, and many rice sacks.

Once we were on the main Hwy we waited to catch a bus. We caught one with out too much trouble, but the driver ripped us off and over charged us (we did not know it at the time, although we were suspicious). This was supposed to be the most comfortable part of the journey, but it it quickly turned into a nightmare that lasted almost 12 hours. At first we did not have proper seats, we were sitting on flimsy plastic stools, but soon enough some people got off and we got seats… but no leg room. I could barely fit into the seats; my knees were jammed up into the hard plastic back of the seat in front of me, and soon they became very painful. The temperature was at least 45 degrees, which was not such a big deal when the bus was moving, but it would stop every 30 minutes, for at least 15-20 minutes. Why? I have no idea, but needless to say that 12 hours later when we arrived in Pakse we were both miserable. To top it all off they dropped us off at a dirty grungy expensive guest house that was a few KM out of the city. We are in a MUCH nicer place today.

Here are the pics from Pakse:

One thought on “How NOT to travel in Laos”