From the outset of the whole debacle I stated that the proper response to bad science (if indeed there is any, and it appears there is not) is good science, not leaked emails.  Or in other words if something inappropriate has taken place in the science, then the proper response is good science to correct any mistakes. Op-eds and blog posts aren’t a proper challenge to the large and independently tested body of science supporting global warming. This is especially true when they are based on nothing more than cherry-picked, out-of-context quotes.

But even if the worst and most damning interpretations of these emails are true it still doesn’t substantially weaken the science behind global warming, as Chris Mooney explains:

Let’s say, just for the sake of argument, that all of the worst and most damning interpretations of these exposed emails are accurate. I don’t think this is remotely true, but let’s assume it.

Even if this is the case, it does not prove the following :

Neither one of these is true, which is why I can say confidently that “ClimateGate” is overblown–and which is why I’ve never been impressed by systematic attacks on the “hockey stick.” Even if that study falls, we still have global warming on our hands, and it’s still human caused.

My sense is that the climate skeptic commenters we’re seeing aren’t actually familiar with the vast body of climate science work out there, and don’t realize how most individual studies are little more than a drop in the evidentiary bucket. It is because of the consilience of evidence from multiple studies and fields that we accept that climate change is human caused, and it is because of the vast diversity and number of scientists, and scientific bodies, who find that evidence compelling that we talk of a consensus.

I don’t see how anything about “ClimateGate” changes this big picture significantly–and again, that’s even if we assume the worst about what the emails reveal.

The Arctic sea ice is still declining, glaciers are still retreating, Australia is still in the grasp of a massive drought, and now we have data suggesting that east Antarctica (long thought to be a stable ice sheet) is melting… in other words despite what might have been said in  these emails the earth is still getting warmer, and we have multiple lines of evidence (completely independent to the leak) attributing global warming to our greenhouse gas emissions.

The emerging scientific consensus on the SwiftHack emails: get real, denialists

And of course the emails never have and never will impact the scientific basis of the reality of anthropogenic warming.

UPDATE 2: Zeke Hausfather over at the Yale Forum on Climate Change and the Media has a very thorough write-up on the 5 major issues that deniers have seized upon:

Given the sheer volume of e-mails over a 12-year period that have now undergone extensive scrutiny (including a useful keyword search tool), it’s almost surprising that there is so little actually there.

It is unfortunate, if perhaps not surprising, that the quotes from the e-mails that have gotten the most publicity from skeptics and in some media strongly distort the views and actions of the scientists in question, contributing to a perception of collusion to manipulate the climate data itself.

Nothing contained in the e-mails, however, suggests that global temperature records are particularly inaccurate or, worse, that they have been manipulated to show greater warming. The  certainly troubling conduct exposed in some of the e-mails has little bearing on the fundamental science that strongly indicates that the world is warming and that anthropogenic emissions of greenhouse gases are the primary cause.

For the scientists involved and for many of their professional colleagues, that is the “bottom line.” Whether the public and its elected and appointed policy leaders reach that same conclusion remains to be seen.

UPDATE 3: Two independent analysis of some CRU data show that it is indeed reliable:

We extracted a sample of raw land-surface station data and corresponding CRU data. These were arbitrarily selected based on the following criteria: the length of record should be ~100 years or longer, and the standard reference period 1961–1990 (used to calculate SAT anomalies) must contain no more than 4 missing values. We also selected stations spread as widely as possible over the globe. We randomly chose 94 out of a possible 318 long records. Of these, 65 were sufficiently complete during the reference period to include in the analysis. These were split into two groups of 33 and 32 stations (Set A and Set B), which were then analyzed separately.

Results are shown in the following figures. The key points: both Set A and Set B indicate warming with trends that are statistically identical between the CRU data and the raw data (>99% confidence); the histograms show that CRU quality control has, as expected, narrowed the variance (both extreme positive and negative values removed). 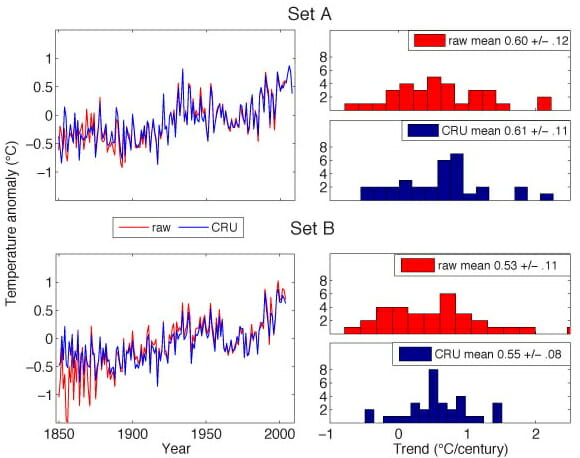 Comparison of CRUTEM3v data with raw station data taken from World Monthly Surface Station Climatology. On the left are the mean temperature anomalies from each pair of randomly chosen times series. On the right are the distribution of trends in those time series and their means and standard errors. (The standard error provides an estimate of how well the sampling of ~30 stations represents the full global data set assuming a Gaussian distribution.) Note that not all the trends are for identical time periods, since not all data sets are the same length.

Conclusion: There is no indication whatsoever of any problem with the CRU data. An independent study (by a molecular biologist it Italy, as it happens) came to the same conclusion using a somewhat different analysis. None of this should come as any surprise of course, since any serious errors would have been found and published already.

It’s worth noting that the global average trend obtained by CRU for 1850-2005, as reported by the IPCC (http://www.ipcc.ch/pdf/assessment-report/ar4/wg1/ar4-wg1-chapter3.pdf), 0.54 degrees/century,* is actually a bit lower (though not by a statistically significant amount) than we obtained on average with our random sampling of stations.

I took the GHCN dataset available here and compared all the adjusted data (v2.mean_adj) to their raw counterpart (v2.mean). The GHCN raw dataset consists of more than 13000 station data, but of these only about half (6737) pass the initial quality control and end up in the final (adjusted) dataset. I calculated the difference for each pair of raw vs adj data and quantified the adjustment as trend of warming or cooling in degC per decade. I got in this way a set of 6533 adjustments (that is, 97% of total – a couple of hundreds were lost in the way due to the quality of the readings). Did I find the smoking gun? Nope.

Not surprisingly, the distribution of adjustment trends2 is a quasi-normal3 distribution with peak pretty much around 0 (0 is the median adjustment and 0.017 C/decade is the average adjustment – the planet warming trend in the last century has been of about 0.2 C/decade). In other words, most adjustment hardly modify the reading, and the warming and cooling adjustments end up compensating each other1,5. I am sure this is no big surprise. The point of this analysis is not to check the good faith of people handling the data: that is not under scrutiny (and not because I trust the scientists but because I trust the scientific method).

The point is actually to show the denialists that going probe after probe cherry picking those with a “weird” adjustment is a waste of time. Please stop the non-sense.

What yet despite a complete lack of evidenced claims of conspiracy are abound. Just another example that the opposition to global warming is political, not scientific.