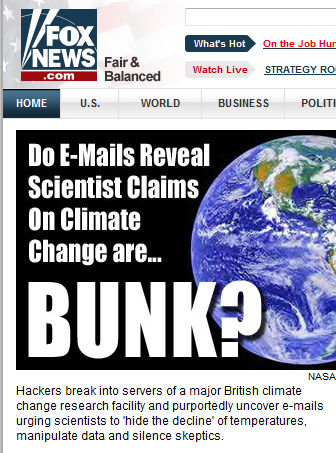 The denialosphere is busy making another mountain out of a molehill. It seems that a bunch of emails from CRU have been stolen and published online.

The authenticity of these emails hasn’t been verified and the possibility of some of them having been edited cannot be ruled out. But this hasn’t stopped the deniers from cherry-picking quotes looking for ‘proof’ that global warming is not real.

This is all rubbish of course. The proper response to flawed science (which climatology is not) is good science, not old emails.

Mann sums up the situation perfectly:

The deniers will probably do anything they can to distract the public from the reality of the problem [of climate change], and the threat that it poses,” he says. “Cherry-picked, out-of-context quotes, stolen from private e-mails, is the best they’ve got.”

And RealClimate has the details:

Since emails are normally intended to be private, people writing them are, shall we say, somewhat freer in expressing themselves than they would in a public statement. For instance, we are sure it comes as no shock to know that many scientists do not hold Steve McIntyre in high regard. Nor that a large group of them thought that the Soon and Baliunas (2003), Douglass et al (2008) or McClean et al (2009) papers were not very good (to say the least) and should not have been published. These sentiments have been made abundantly clear in the literature (though possibly less bluntly).

More interesting is what is not contained in the emails. There is no evidence of any worldwide conspiracy, no mention of George Soros nefariously funding climate research, no grand plan to ‘get rid of the MWP’, no admission that global warming is a hoax, no evidence of the falsifying of data, and no ‘marching orders’ from our socialist/communist/vegetarian overlords. The truly paranoid will put this down to the hackers also being in on the plot though.

Instead, there is a peek into how scientists actually interact and the conflicts show that the community is a far cry from the monolith that is sometimes imagined. People working constructively to improve joint publications; scientists who are friendly and agree on many of the big picture issues, disagreeing at times about details and engaging in ‘robust’ discussions; Scientists expressing frustration at the misrepresentation of their work in politicized arenas and complaining when media reports get it wrong; Scientists resenting the time they have to take out of their research to deal with over-hyped nonsense. None of this should be shocking.

It’s obvious that the noise-generating components of the blogosphere will generate a lot of noise about this. but it’s important to remember that science doesn’t work because people are polite at all times. Gravity isn’t a useful theory because Newton was a nice person. QED isn’t powerful because Feynman was respectful of other people around him. Science works because different groups go about trying to find the best approximations of the truth, and are generally very competitive about that. That the same scientists can still all agree on the wording of an IPCC chapter for instance is thus even more remarkable.

No doubt, instances of cherry-picked and poorly-worded “gotcha” phrases will be pulled out of context. One example is worth mentioning quickly. Phil Jones in discussing the presentation of temperature reconstructions stated that “I’ve just completed Mike’s Nature trick of adding in the real temps to each series for the last 20 years (ie from 1981 onwards) and from 1961 for Keith’s to hide the decline.” The paper in question is the Mann, Bradley and Hughes (1998) Nature paper on the original multiproxy temperature reconstruction, and the ‘trick’ is just to plot the instrumental records along with reconstruction so that the context of the recent warming is clear. Scientists often use the term “trick” to refer to a “a good way to deal with a problem”, rather than something that is “secret”, and so there is nothing problematic in this at all. As for the ‘decline’, it is well known that Keith Briffa’s maximum latewood tree ring density proxy diverges from the temperature records after 1960 (this is more commonly known as the “divergence problem”–see e.g. the recent discussion in this paper) and has been discussed in the literature since Briffa et al in Nature in 1998 (Nature, 391, 678-682). Those authors have always recommend not using the post 1960 part of their reconstruction, and so while ‘hiding’ is probably a poor choice of words (since it is ‘hidden’ in plain sight), not using the data in the plot is completely appropriate, as is further research to understand why this happens.

The timing of this particular episode is probably not coincidental. But if cherry-picked out-of-context phrases from stolen personal emails is the only response to the weight of the scientific evidence for the human influence on climate change, then there probably isn’t much to it.

From what I have actually seen it just “shop talk” taken out of context and nothing more, very much as if a store clerk said they were going to go “hunt down some customers” and then someone else tried to claim that they were planning a murder.

Context is everything, and we have none.

It is also worth mentioning that if any misdeeds were committed, they should be criticized. Also if any science was indeed done improperly (seems unlikely given the scrutiny it has withstood) then it must be corrected. It is worth repeating that bad science needs to be corrected by good science, not the ranting of deniers, column writers or politicians.

It is worth repeating again (because I know someone out there will claim otherwise) that nothing in this post should be taken as a defence for shoddy science. If anything inappropriate has taken place then it should be condemned, and countered with good science. But so far nothing incriminating has come to light. As Geenfyre points out:

Is there really nothing to this?

I think so. The edited bits we are getting can sound bad, but the actually say absolutely nothing. Stripped of context they could suggest all kinds of unethical behaiour … or nothing at all.

Nothing we have seen so far actually says anything at all, but the Deniers swear this topples climate science (as mentioned, it couldn’t no matter what they found).

The fact that deniers have jumped all over this shows again their disregard for the truth. They automatically assume the worst (so obviously they are not skeptics), without any evidence to back up their extreme claims. Anyone who jumped on this has revealed their true colours. They aren’t interested in finding truth… but we already knew that.