In a press conference, Environment Minister Peter Kent said that the perceptions of scientists being muzzled has been caused by journalists who want to set their own agenda of who they talk to and when. Yes it is simple. If Journalists would just stop asking questions, the government wouldn’t have to stop the scientists from answering. Better yet, if the scientists would stop doing science there would be nothing to ask them about. And if mother nature would stop being such a drama queen in the first place we wouldn’t have to worry about any of this.

If journalists would stop asking questions, the government wouldn’t have to stop the scientists from answering

The above video by Canadian comedian/political commentator Rick Mercer might be funny, but it sits uncomfortably close to the truth. That truth being that over the past several years, since Stephen Harper was elected Prime Minister,  the Canadian government has made it increasing difficult for government scientists to speak to the media and the public about their research.

In a word Canadian scientists are being muzzled. 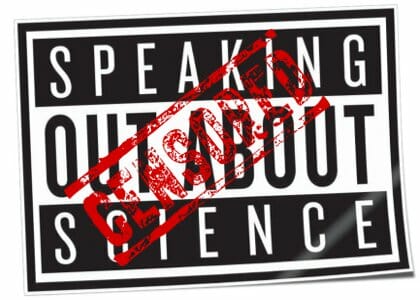 The most recent and perhaps most egregious example comes from the International Polar Year 2012 conference in Montreal, where scientists from around the world gathered to discuss global change, arctic ice, seabirds and other environmental, social and economic issues that relate to the polar regions. Canadian government scientists, however, have been warned not to talk to the media without governmental supervision.

Specifically the scientists were sent the following email (emphasis mine):

You are one of approximately fifty EC [Environment Canada] specialists that have been identified as participating in the final International Polar Year conference. Media will be present, and all presentations are open to media. Media interest in EC science is expected.

If you are approached by the media, ask them for their business card and tell them that you will get back to them with a time for interview. Send a message to your media relations contact with the media contact information and they will organize the interview. They will most probably be with you during the interview to assist and record. For anything outside of your area of expertise, including other research or policy issues, refer the journalist to the media relations contact.

The message sent to scientists was clear: Big Brother is watching you.

This was clearly an attempt to intimidate the scientists into not saying anything that might be considered to be “off-message” to the government. But worrying about what might or might not be off-message is not the responsibility of a scientist. Scientists should only worry about being honest about their data and how to best communicate their findings. If those findings happen to go against government policy, that should never be a scientist’s problem.

It is typical in scientific conferences for the audience, including the media, to ask questions of the presenters. What is a government scientist to do? Answer the question and risk getting reprimanded, or refuse to answer the question and stifle the exchange of ideas that makes these conferences so valuable. What about any impromptu quick interviews, usually conducted immediately following a presentations by members of the media, looking for clarifications or extra details before they submit their story to meet their tight deadlines. Should the government scientist ignore those as well and risk inaccurate reporting of their work?

Neither options are acceptable.

But the muzzling of scientists goes much deeper than sending media relations observers to monitor scientists at a single conference. That was just the latest in a long line of examples of the Canadian government preventing the media from getting access to government scientists who more often than not are only too willing to speak to reporters about their work.

For example in 2010 Scott Dallimore, a geoscientist working for National Resources Canada, co-authored a paper published in Nature about the outburst flood path from Lake Agassiz to the Arctic Ocean during the Younger Dryas 13000 years ago. This study helped improve our understanding of the abrupt changes in climate towards the end of the last ice age. Journalists, however, were unable to interview Dallimore without him first getting ministerial approval which was a lengthy process requiring Dallimore to submit all the questions he received and his answers to the minister’s office for approval before sending them to the media.

And in 2011 Dr Kristi Miller wrote an important paper in the journal Science looking into the decline of wild salmon populations on Canada’s west coast. The journal thought the paper was important enough that they sent out a press release with Dr Kristi Miller as the principle contact. However the Department of Fisheries and Oceans (Miller’s employer) declined all requests by the media to interview her. In fact since her research was published in 2011 the Department of Fisheries and Oceans has yet to let Miller talk about her work to anyone from the media.

Also in 2011, Dr David Tarasick, who works for Environment Canada, co-authored a paper published in Nature about the unprecedented loss of arctic ozone that happened in early 2011.  Environment Canada prevented Tarasick from talking with reporters for three weeks after the paper was published, which caused him to quip: “I’m available when media relations says I’m available”

Thanks to an access to information request filled by Tom Spears, the science reporter for the Ottawa Citizen, we have a behind the scenes look at what happens inside government departments when reporters ask for an interview with scientists. What Spears uncovered was that a simple non-controversial request for an interview with a scientist resulted in 50 pages of emails between 11 people at the National Resource Council before Spears was sent some boilerplate talking points that did not answer any of the questions he had asked.

Spears’ questions related to a study looking at how to detect via radar how much water is contained in different types of snow fall. Had Spears requested an interview with scientists working on something the government considered controversial, such as climate change, the odds of Spears getting his questions answered would have been drastically lower.

These high-profile examples are hardly a comprehensive list, in fact this trend of preventing scientists from talking to the media has been noticed by several prominent journalists and has resulted in many reporters simply not bothering to ask government scientists questions or getting their input on the stories they write. Media requests to government scientists have dropped dramatically since the muzzling policies were introduced.

The situation in Canada has gotten so bad, that the journal Nature has written several editorials criticizing the government policy of preventing scientists access to the media.

What makes the situation in Canada all the more appalling is what is happening south of the border in the United States. Those differences are perfectly illustrated by Tom Spears’ experience. Recall that a simple request for an interview with a scientist at the National Resource Council resulted in a flurry of emails that ultimately resulted in Spears getting a bunch of useless talking points that did not address any of his questions. Thankfully for Spears the study in question was a joint NRC-NASA study. A quick search turned up the phone number of a NASA scientist involved with this study and Spears just phoned and quickly got enough information to write his article.

The difference is startling. While in the US the government has made it clear that scientists are free to talk about their work to reporters, in Canada the government stands between scientists and reporters in an attempt to ensure that every government employee remains on-message 100% of the time.

While the US has received praise for opening up access to government scientists, Canada has, rightfully, been scorned for its policy of muzzling.

While the Canadian government’s attempts to muzzle scientists serve as the worst example of the current government’s dismal attitude towards science, it is not the only area of concern.  Over the past several years science budgets all over the country have been slashed, particularly in the earth sciences where there is real potential for scientists to go “off-message”.

Anyone paying attention to the policy side of climate change surely must know that Canada’s record in reducing GHG emissions has been nothing short of abysmal. Not only did Canada fail to even attempt to meet its obligations under the Kyoto Protocol but Canada pulled out at the last possible moment in order to not be held in “non-compliance” under the Kyoto Protocol. Since then the government has talked about reducing emissions, while aggressively promoting the expansion of the Athabasca tar-sands.

So there exists plenty of opportunity for scientists to say things that might embarrass the government. As the video at the top of this article states: “if the scientists would stop doing science there would be nothing to ask them about”

It is in that vein that the Canadian government seems to be acting.

It started in 2008 with the government’s decision to fire the national Science Adviser, Dr Arthur Carty. But that was only the beginning.

In 2011 the government massively cut Environment Canada’s budget by 20% and reduced its staff by 11%. This latest blow came after a decade of many less severe budget cuts that had left it barely functional. Particularly hard hit was atmospheric ozone research and monitoring. These cuts, among others, forced the closure of the Polar Environment Atmospheric Research Laboratory, which made  key measurements of ozone which lead to Dr David Tarasick’s paper documenting the unprecedented ozone losses that occurred in early 2011. Recall that Environment Canada prevented Tarasick from talking to the media when the paper was published.

These cuts also eliminated programs relating to pollution monitoring and the atmospheric transport of toxic chemicals, which tend to accumulate in the Canadian arctic. As it stands now Environment Canada has been left with very little real scientific or research power, and some researchers have even stated that these cuts could threaten Canada’s ability to maintain its international scientific obligations.

In addition, after 6 years of adding no additional funding the Canadian Foundation for Climate and Atmospheric Sciences (CFCAS) was left with empty coffers and major research initiatives on the verge of collapse (such as the Polar Environment Atmospheric Research Laboratory).  The government announced its intention to let CFCAS run out of money and shut down taking away the jobs of many scientists, technicians and students.

Perhaps most appalling was the government’s excuse for cancelling the National Round Table on the Environment and the Economy. The round table was started in 1988 by then Conservative prime minister Brian Mulroney. It was one of the first forums to bring business and environmental stakeholders together in order to provide non-partisan research and advice on federal policies. It recently completed a comprehensive study that concluded that the cost of unmitigated climate change to Canada could be as high as 43 billion dollars per year in 2050.

In cancelling the round table the government gave what is perhaps the most absurd excuse possible, saying that it could get the same non-partisan scientific expertise from the internet instead.

Critics have been quick to point out that the government’s actions are motivated by a desire to keep inconvenient data as far away from policymakers as possible. Or as Rick Mercer put it, “If the scientists would stop doing science there would be nothing to ask them about“.

Now all that is left for the government to do it figure out how to “prevent mother nature from being such a drama queen in the first place.”

Until then there is plenty to worry about.

12 thoughts on “The muzzling of Canada’s scientists”