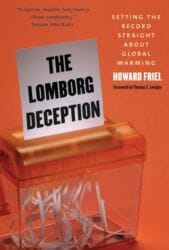 Not surprising for those who have paid attention to Lomborg over the years. His favourite trick is to claim he agrees with the IPCC then consistently lie about what the IPCC said.

A big reason Lomborg was taken seriously is that both of his books, The Skeptical Environmentalist (in 2001) and Cool It(in 2007), have extensive references, giving a seemingly authoritative source for every one of his controversial assertions. So in a display of altruistic masochism that we should all be grateful for (just as we’re grateful that some people are willing to be dairy farmers), author Howard Friel has checked every single citation in Cool It. The result is The Lomborg Deception, which is being published by Yale University Press next month. It reveals that Lomborg’s work is “a mirage,” writes biologist Thomas Lovejoy in the foreword. “[I]t is a house of cards…Friel has used real scholarship to reveal the flimsy nature” of Lomborg’s work…

When Friel began checking Lomborg’s sources, “I found problems,” he says. “As an experiment, I looked up one of his footnotes, found that it didn’t support what he said, and then did another, and kept going, finding the same pattern.” He therefore took on the Augean stables undertaking of checking every one of the hundreds of citations in Cool It. Friel’s conclusion, as per his book’s title, is that Lomborg is “a performance artist disguised as an academic.”

Also see here for a list of error’s found in his first book, the Skeptical Environmentalist.

And here is the book blurb from the Yale Press site:

In this major assessment of leading climate-change skeptic Bjørn Lomborg, Howard Friel meticulously deconstructs the Danish statistician’s claim that global warming is “no catastrophe” by exposing the systematic misrepresentations and partial accounting that are at the core of climate skepticism. His detailed analysis serves not only as a guide to reading the global warming skeptics, but also as a model for assessing the state of climate science. With attention to the complexities of climate-related phenomena across a range of areas—from Arctic sea ice to the Antarctic ice sheet—The Lomborg Deception also offers readers an enlightening review of some of today’s most urgent climate concerns.

Friel’s book is the first to respond directly to Lomborg’s controversial research as published in The Skeptical Environmentalist (2001) and Cool It: The Skeptical Environmentalist’s Guide to Global Warming (2007). His close reading of Lomborg’s textual claims and supporting footnotes reveals a lengthy list of findings that will rock climate skeptics and their allies in the government and news media, demonstrating that the published peer-reviewed climate science, as assessed mainly by the U.N.’s Intergovernmental Panel on Climate Change, has had it mostly right—even if somewhat conservatively right—all along. Friel’s able defense of Al Gore’s An Inconvenient Truth against Lomborg’s repeated attacks is by itself worth an attentive reading.

Or rather a list of findings that would ‘rock climate skeptics and their allies in the government and news media’ if they were at all interested in finding truth. But history shows that is not the case.