Thanks to a rapid rebound in recent months, global sea ice levels now equal those seen 29 years ago, when the year 1979 also drew to a close.

That is incredible!  Especially after the tremendous melt this summer… and only if you ignore the fact that this happens EVERY year thanks to a little thing called winter. As you’ve probably already guessed the claim is very misleading.  As Tamino over at open mind points out:

Suppose you needed to understand these data: 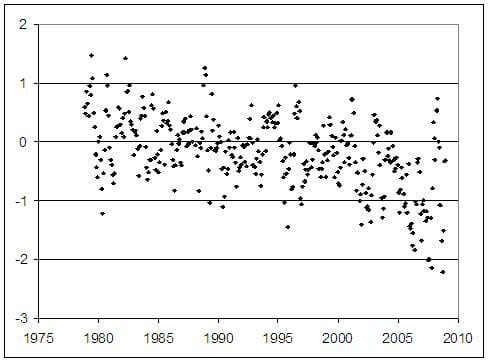 You’re especially interested in the trend present, so you can have some idea what to expect in the future. You suspect that there’s a downward trend (based on visual inspection of the data), but you’re not sure whether or not it’s significant, or whether the trend might be nonlinear, and you’re not a statistician. So you hire someone to analyze the data, who reports that the proper characterization of the long-term trend is summarized thus: 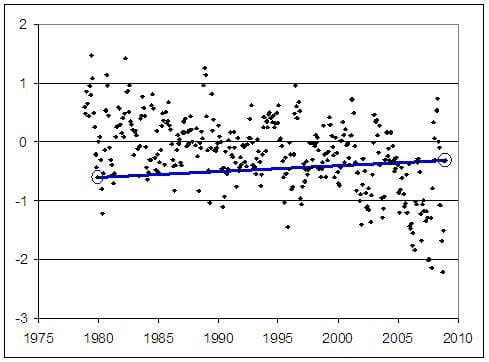 You protest. “That’s not a proper characterization of the trend over time! You’ve just connected two points, which only emphasizes the fluctuations that happen all the time, while ignoring all the other data! You’ve completely mischaracterized the real trend! I could’ve done a better job myself, just by fitting a trend line with ExCel!” 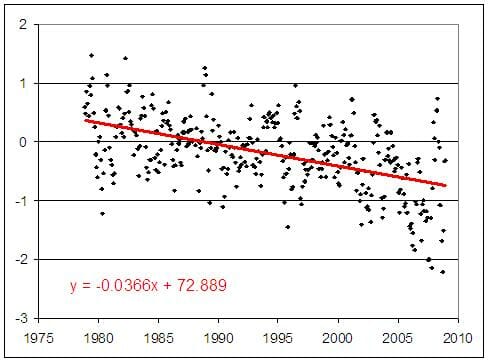 You’d be well advised not to pay for such analysis services. Characterizing the long-term behavior, and what might reasonably be expected in the future, in this way is — well — not smart…

Fitting a trend line (with Excel or any other software) is a much better way to characterize the trend. It turns out that the trend is statistically significant (strongly so), so we can conclude that global sea ice area has trended down in the 30 years it’s been monitored by satellites. In fact there’s evidence that the rate of decline has increased, so the downtrend is actually accelerating — but the evidence is not yet statistically significant. We can certainly expect the future to show further decline, and we shouldn’t be at all surprised if it declines even more rapidly than it has so far.

Time to get back to real science. It’s much more fun.

In fact despite the claim of a recent rapid rebound of arctic sea ice extent, the WMO recently stated that:

Arctic sea ice extent during the 2008 melt season dropped to its second-lowest level since satellite measurements began in 1979… Because ice was thinner in 2008, overall ice volume was less than that in any other year.