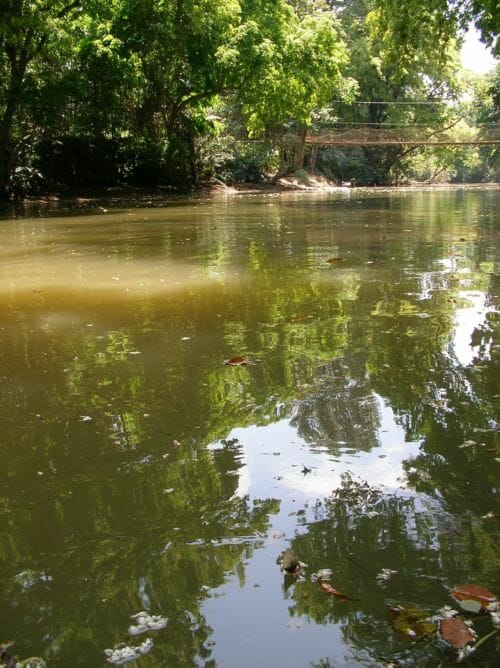 Trekking in Taman Negara was 3 days filled with adventure, and amazing sights.

It all started with a two hour boat ride up river, to an abandoned resort, which the jungle in in the process of reclaiming.

The first day we hiked 8km through the jungle, passing by huge trees… 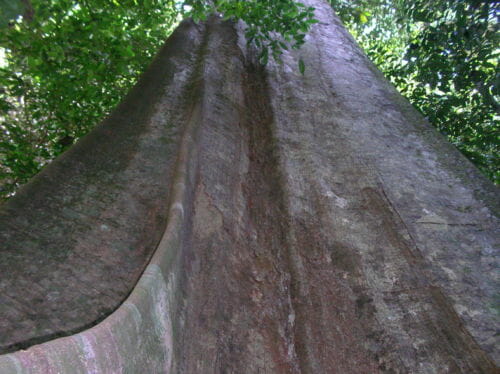 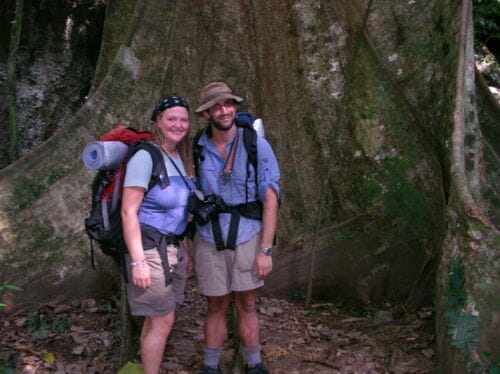 and mushrooms of all kinds. 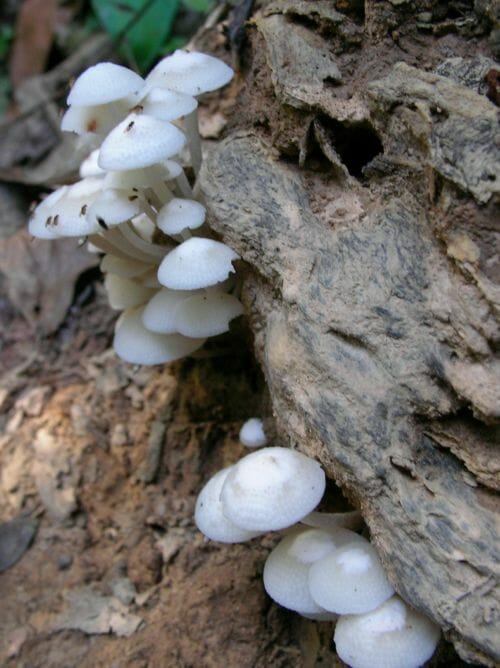 every so often our guide Eei would show us edible plants, and mushrooms or let us know what animals dung we had just steeped into (usually elephant).

we eventually made it to our destination… 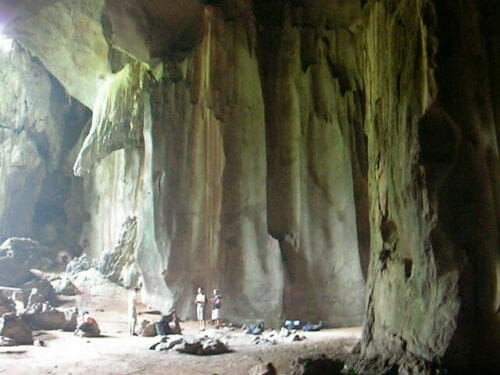 a large cave (so large in fact that sometimes elephants use it for shelter) where we would spend the night. We did not see any elephants unfortunately only rats crawling all around us. 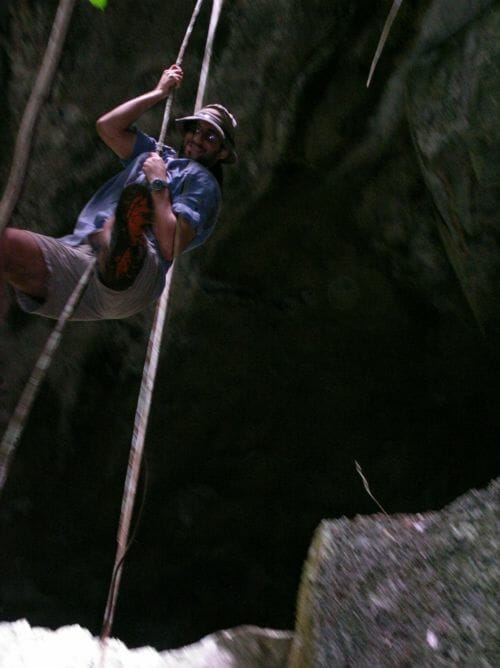 It was all fun and games until Richard (a member of our trekking group) decided to go one more time; as he swung over some unfriendly stones the vine gave out, and Richard fell.

But only for a second as the vine caught on something else and fully supported Richard just above the unfriendly mean looking rocks. Richard was fine aside from the missing skin on his fingers, but after some first aide, he was good as new.

Vine swinging sure makes you hungry so after a small walk we had lunch, and Eei showed us how to make jungle war paint; we all ended up with painted faces. 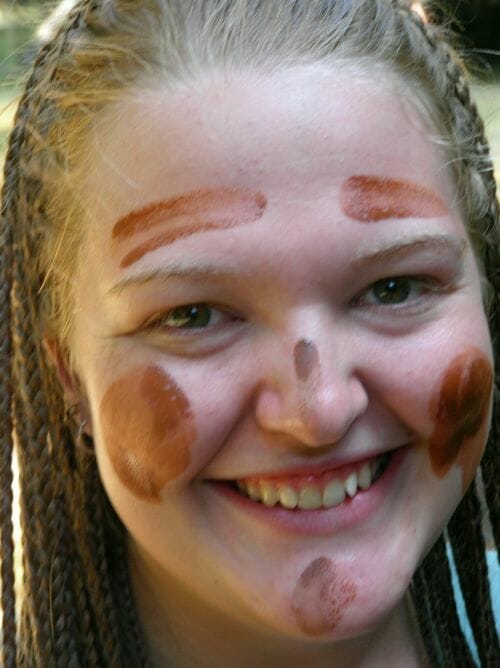 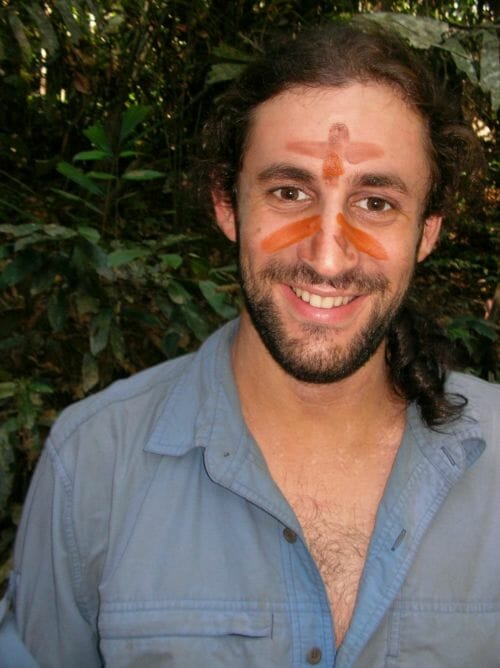 Leeches are quite common in the jungle, and some of us had the misfortune of getting them on our feet. 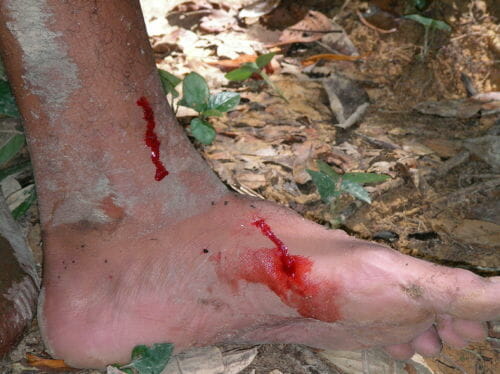 Leeches inject an anti-coagulant when they bite so the small wounds can bleed a surprising amount.

That night Breanne and me stayed in a hide (a small raised hut over looking a clearing frequented by animals). 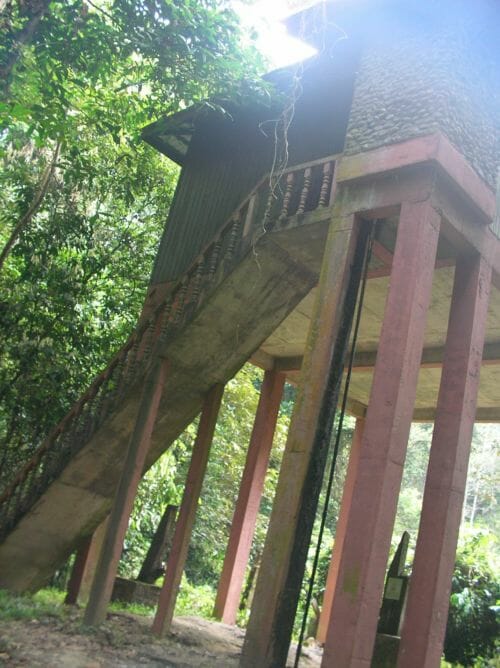 The night before we stayed at the hide people reported seeing 7 elephants, but we saw none… in fact the only thing we saw were a few monkeys drinking water, and rats… lots of rats.

The rats were incredibly annoying, and would constantly get into our food (even though it was hanging off the rafters). Every few minutes I would have to get up and scare the rats away. By the end of the night (i had gotten no sleep) I was so pissed off at the rats that I would just grab them by the tail (they are helpless when you do this) and throw them out the window. That still did not deter hem, but at least it provided a small amount of entertainment for my troubles.

After that rat filled night we walked to the river to hop on a boat and take us to an Orang Asli Village. 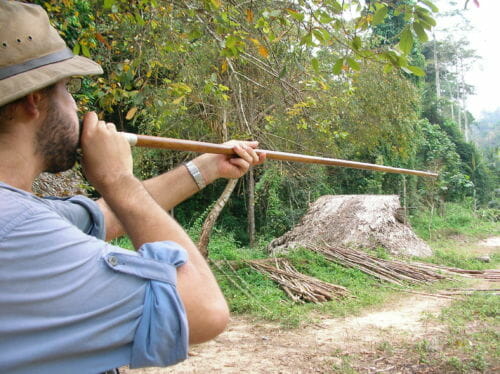 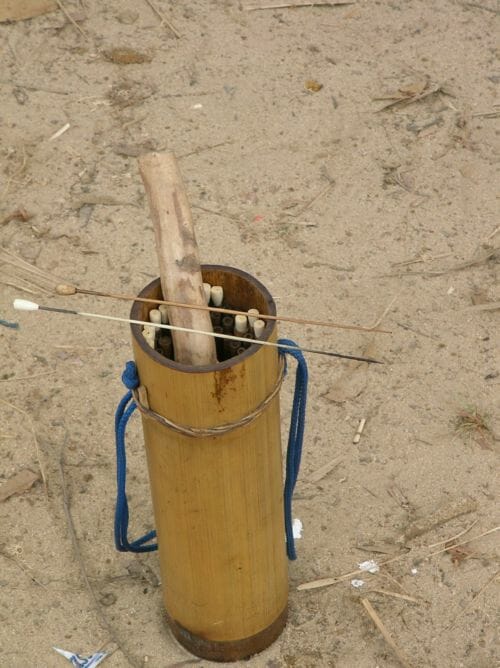 The black tip on the lower dart is poisonous.

The Orang Asli still use these blow pipes (which have surprising range) to hunt for food in the jungles.

That was the end of our trek, and both Breanne and me needed a shower.

2 thoughts on “No one gets out of the jungle…”