We made it! Our 4 days in the jungle were quite an experience, but we survived to tell the tale.

After a short ride in the back of a pickup truck we arrived at Mae Sam Lam, a small Town on the Salween river, from there we took a 3 hour boat ride deep into the jungle away from any electricity, roads, trucks or noisy motorbikes. 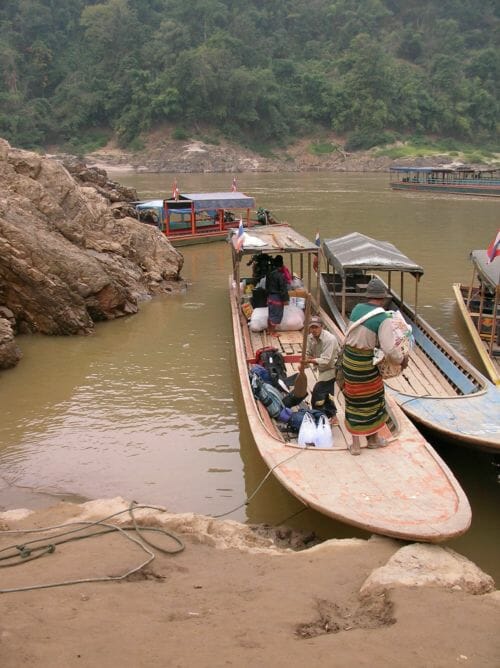 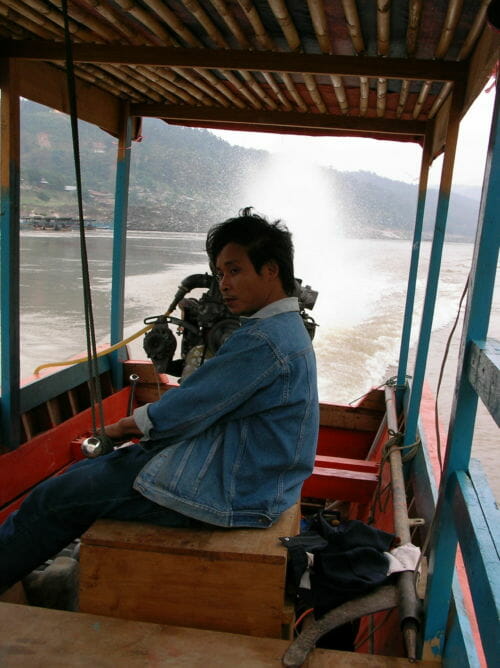 On the way to our destination we had to stop at many Thai Police checkpoints. 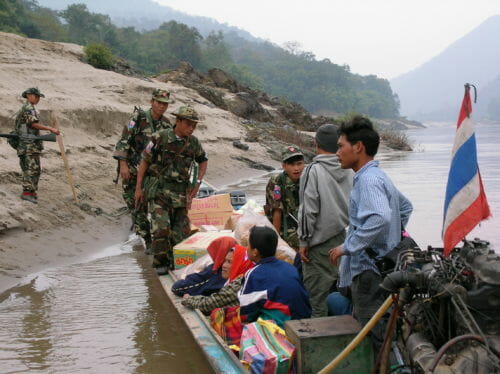 All of a sudden I looked up and saw 20 men in full camo gear on the shore ; 10 of them holding automatic rifles, it was OK this is the Karen army, friends of our guide. 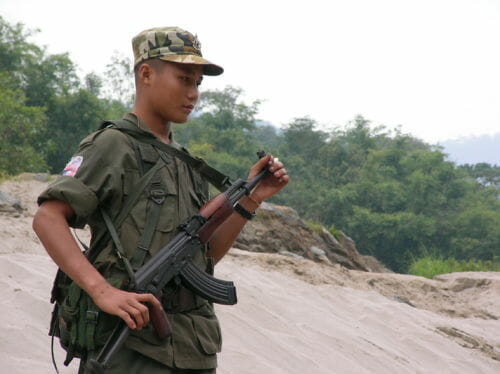 Further along the river we stopped at a large Karen village on the Burmese side, for lunch. 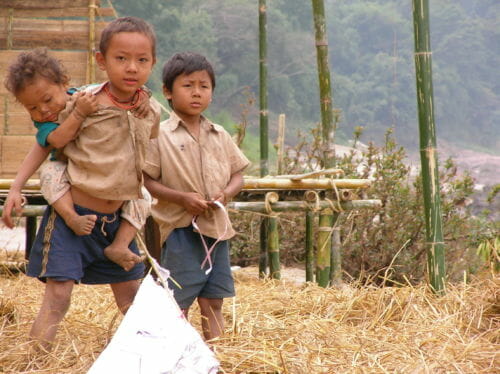 after lunch the real trek begins… 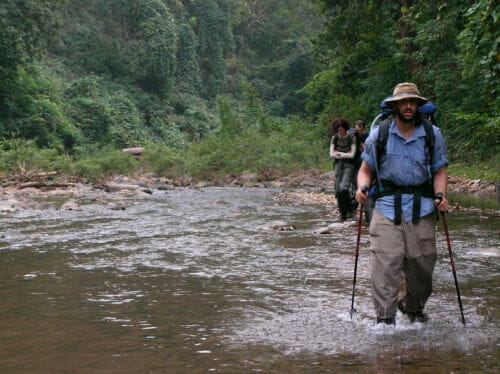 To reach the village where we were spending the first night we followed a small stream, crossing it many times (50+)

When we arrived at the village, we realized that we were the main attraction. The entire village came and stared at the strange people who had wandered out of the jungle… 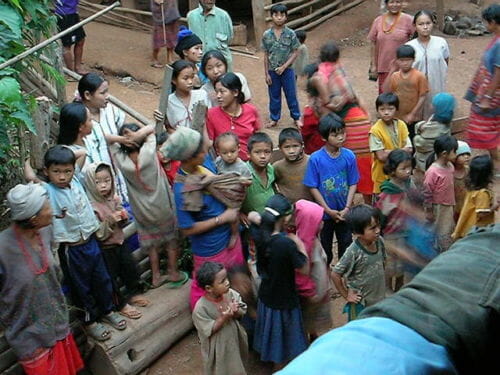 they followed us everywhere we went. 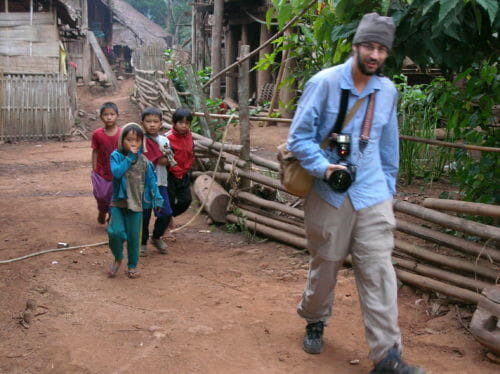 The next morning, our transportation (elephants) were late, so I took this opportunity, to try an learn to speak Karen. 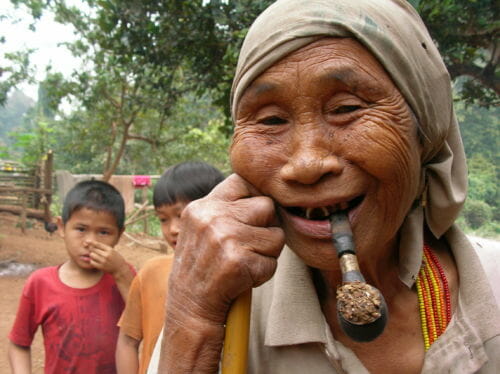 My teacher (above) would say things to me in Karen, and I would attempt to repeat them… which I could not do, and the whole town laughed at my attempts. It was great fun 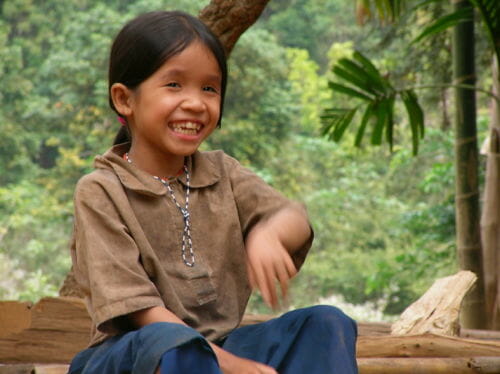 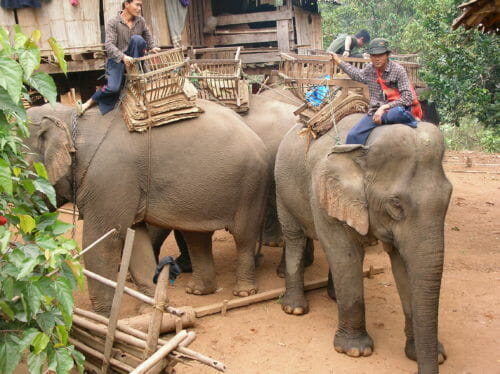 and we were off 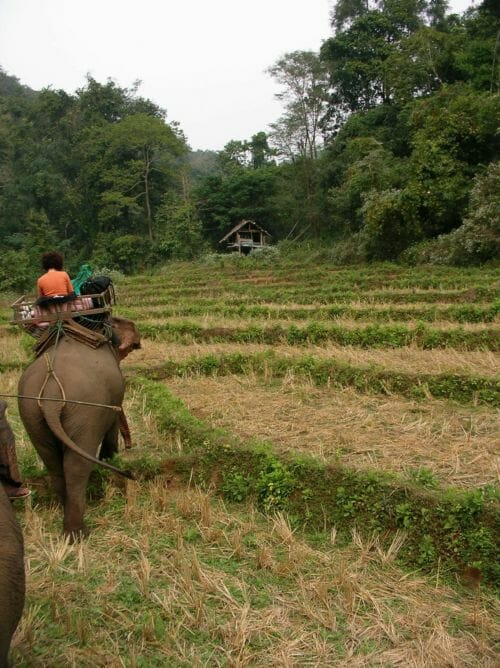 walking through subsistence rice paddies, and jungle paths, to a small camp where a family tends their fields (sugar cane, rice and banana). 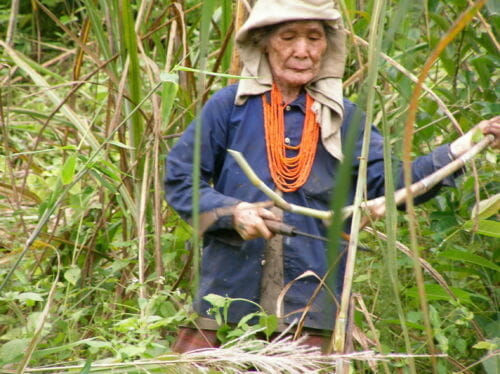 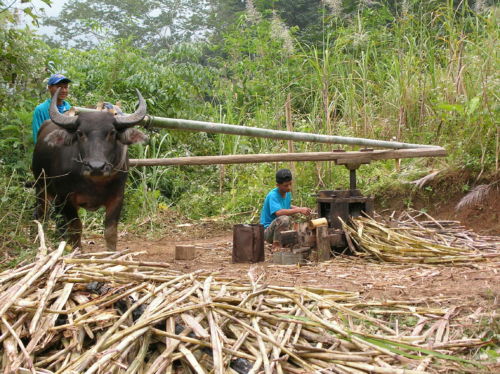 We spent the night in the small camp.

That night after our farang dinner I stayed up and ate some real Karen food (a stew made from small fish, cray fish and tadpoles amongst other things, served with plenty of chili… it was delicious) and drank plenty of banana whiskey.

After dinner I stayed up with our guides and the Karen Family drinking even more banana whiskey, and smoked some Burmese cigars. I listened to Adul (our guide) talk about Karen traditions and culture, about black magic and white magic, and about how missionaries have converted many of the local Karen people, and ravaged their animistic believes. The more he talked about Missionaries the angrier he became, and you could detect the sadness in his voice when he spoke of the dying animistic Karen believes.

After my delicious Karen dinner the night before I decided why not eat a Karen breakfast, well it was another super spicy stew. mmmmmm it was good, even though later I found out that it was a stew made of jungle rat. 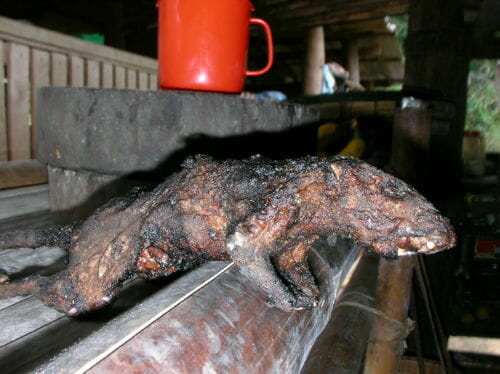 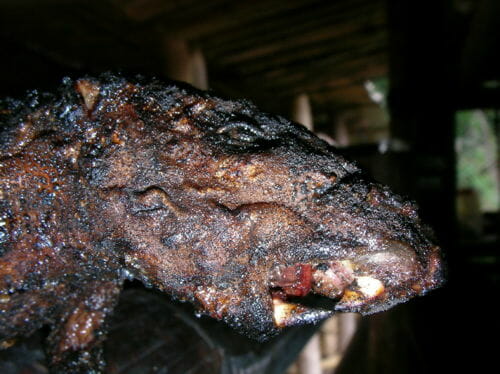 We were off to the next village (on foot). The locals were so shy they stayed away from us and peered at us from the distance; any attempts to get closer and they would scurry away. Apparently they had never seen farang before.

That night (the 24th) Adul, our guide, bought a pig and we had fresh pork for dinner, and it was good!

Again after the farang dinner I stayed up and ate some Karen food. This time the family made a spicy stew from ‘leftover’ pork. All the pork went into the stew, skin, organs, head, feet… The only exception was the stomach and intestines, which were boiled, and which we ate separately. It was all very tasty, but I now know that I prefer boiled pork stomach over boiled pork intestines. Again after dinner I stayed up and talked with our guides and the family, while drinking banana whiskey and smoking Burmese cigars.

Staying up late with the families, and eating drinking and smoking with them was the highlight of the trip from me, I feel like I experienced (and learned allot) a slice of traditional village life. A life not yet complicated by technology or ‘civilization’. I know that places like these are becoming relics of the past and I feel extremal lucky to have had these experiences.

Our last day on our trek was a long and grueling hike, back to the nearest village with “road” access.

For 5.5 hours we slowly trudged though some of the toughest trails I have ever been on, to our destination. Just when I though I could go no further we passed about 15 Karen in flip fops carrying long plastic pipes 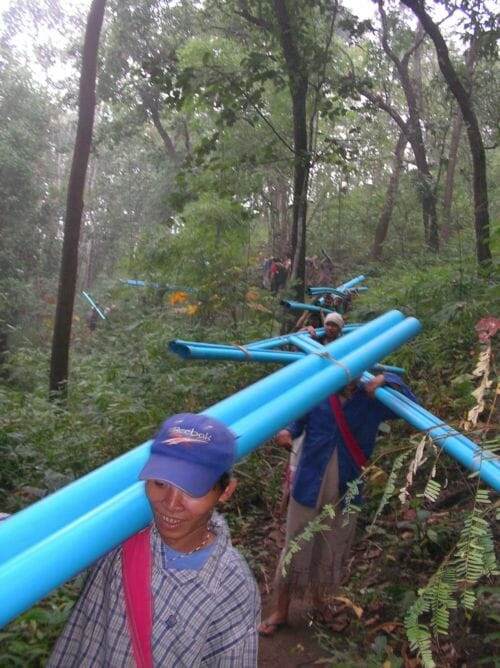 sure puts things in prospective.

Finally we made it!!!

The adventure was over… or so I thought, but it had started to rain and the dirt road out of the village became slick, and we were loosing traction. It became clear to me that this was not normal when the Thais in our truck looked worried, and For the first time I understood Thai perfectly. We approached a man on the road who began yelling at the driver in Thai, but I understood what he said

“the road up ahead is VERY slick you cannot make it!”

We all got out of the truck and began walking down the road in the rain, luckily the truck had chains, and the dirt road ended a few hundred meters away to be replaced with a nice (relatively speaking) paved road. We made it… until the clutch broke.

UDATE: It seems that this entire area will be flooded by a new dam being built on the Salween river. The only thing we can do is ensure enough people know about these atrocities, and hope that enough noise is made so that future plans will be forced to take into consideration these seemingly unimportant people.