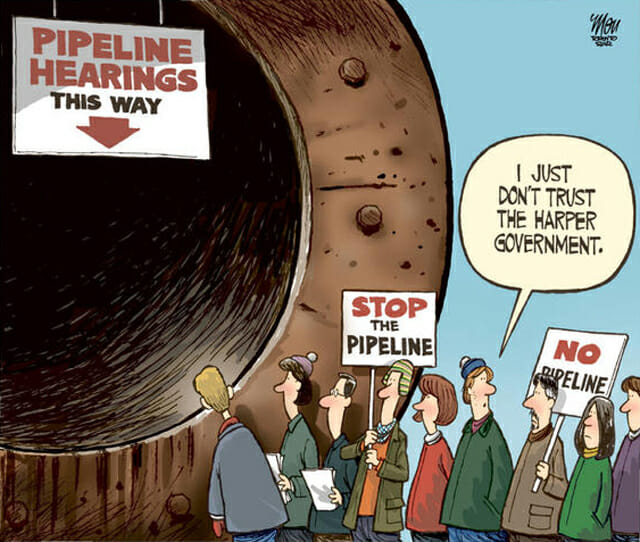 The recent approval of the Enbridge Northern Gateway pipeline by National Energy Board and the Canadian Environmental Assessment Act review panel has brought a renewed flurry of attention to the project. The media here in Canada has run several stories in recent weeks discussing what the approval means for the pipeline and what if anything can be done to appease those who oppose the pipeline. These discussions, while interesting, focus on the wrong issue and completely ignore what really matters.

Even on shows like CBC’s As it Happens and The Current, which normally do a very good job of picking out the crux of complex, nuanced issues, have focused on the potential for spills while completely ignoring the larger issue of climate change. On and on go the discussions about the potential risks of a spill and the many ways the Enbridge pipeline could be made to mitigate those risks.

In essence this is the same thing that the joint review panel that approved the pipeline focused on:

Many people said the project would lead to increased greenhouse gas emissions and other environmental and social effects from oil sands development. We did not consider that there was a sufficiently direct connection between the project and any particular existing or proposed oil sands development or other oil production activities to warrant consideration of the effects of these activities.

But as Simon Donner points out, this doesn’t make any sense:

the core argument for additional pipelines from Alberta has been to encourage economic expansion, via increased operations in the oil sands. If the panel is correct, and the Northern Gateway pipeline would not lead to any further oil sands development, then why build the pipeline?

Either the panel is wrong, or the case for the pipeline is wrong. Which is it?

The mandate of the joint review panel ensured that it focused on risks which can be mitigated without harming the pipeline or the prospect of future of oil sands development while ignoring the larger risks that can’t be so easily mitigated.

An oil spill would be locally devastating, just ask the people living near the Enbridge spill in the Kalamazoo River, and given the difficulties of cleaning up dilbit a spill it could take years to be fully cleaned up. To the communities in the path of the pipeline this is a large risk, and it shouldn’t be minimized.

But unmitigated climate change would be globally devastating. The risks wouldn’t be limited to those communities in the path of the pipeline, everyone, from the Prime Minister of Canada, to a poor garment worker in Bangladesh would be affected. And while a dilbit spill might take years, or even decades, in a worst case scenario, to clean up we would be stuck with the consequences of climate change, for hundreds or thousands of years.

Compared with the risks posed by unmitigated climate change, even the largest dilbit spill would be orders of magnitude less devastating.

If we really care about the environment, all of it, not just the bit in the path of the pipeline, we need a strategy that puts the focus on the climate, and not on spills. If we focus on spills, with a lot of work and a little luck we might stop a pipeline here or there, but the fossil fuel industry will continue to expand. As long as the atmosphere remains a free dumping ground for carbon pollution there is simply too much money to be made in digging up fossil fuels and selling them to people (like me and you) who want to burn them.

Ultimately the risks of a burst pipeline spewing forth hundreds of thousands of gallons of dilbit can be mitigated. Sophisticated and rigorous inspection polices to ensure that weak spots in the pipeline are detected before the pipe fails. Removing liability caps to ensure that Enbridge is forced to pay for any issues caused by the pipeline and requiring than they have enough cash set aside, or have enough insurance to be able to afford to fully clean up any potential spill and compensate anyone affected. Policies such as these can serve as effective mitigation (but not elimination) of the risks associated with a pipeline. Mitigating the risk of spills is the most likely outcome of an anti-pipeline campaign focused on local risks. Of course even achieving this requires significant effort, again just ask the people living near the site of the Kalamazoo River spill. But all of this is at least possible, if not business as usual.

Contrast that with the risks of climate change. Mitigating climate change (absent any huge advances in carbon capture and storage) requires us to slowdown fossil fuel extraction then stop and leave most of the remaining fossil fuels in the ground. And we have to do this is a frighteningly short amount of time. There is no way to reconcile climate mitigation with the building of a new pipeline. Likely this is why climate change was simply ruled outside the scope of the joint review panel that approved the Enbridge Northern Gateway Pipeline. Had they been forced to consider climate change, the result of the joint review panel could well have a rejection of the pipeline proposal.

The biggest hurdle in putting the focus back on climate is that the abstract and future risks of our current emissions don’t motivate people like the way the easily understood risks of an oil spill do. This is a good argument for ensuring that we don’t forget about local spills, but if the discussions around pipelines continue to ignore the climate impacts, the risks of unmitigated climate change will continue to be overlooked by most people. As Mark Jaccard pointed out a few months ago:

Difficult as it is to get the attention of enough people to influence our political process into acting on climate, there is unfortunately no other way to win this long-term battle than to focus on the fact that carbon pollution changes the climate – for the worse – and so we must stop the expanding extraction of fossil fuels from the earth’s crust. No expansion of oil sands. No new coal mines. No new delivery infrastructure like pipelines and coal ports. No aiding and abetting of the carbon pollution that will wreak havoc on the environment everywhere – not just the environment in the path of pipelines, tankers and trains.

11 thoughts on “It’s not the spill that matters”