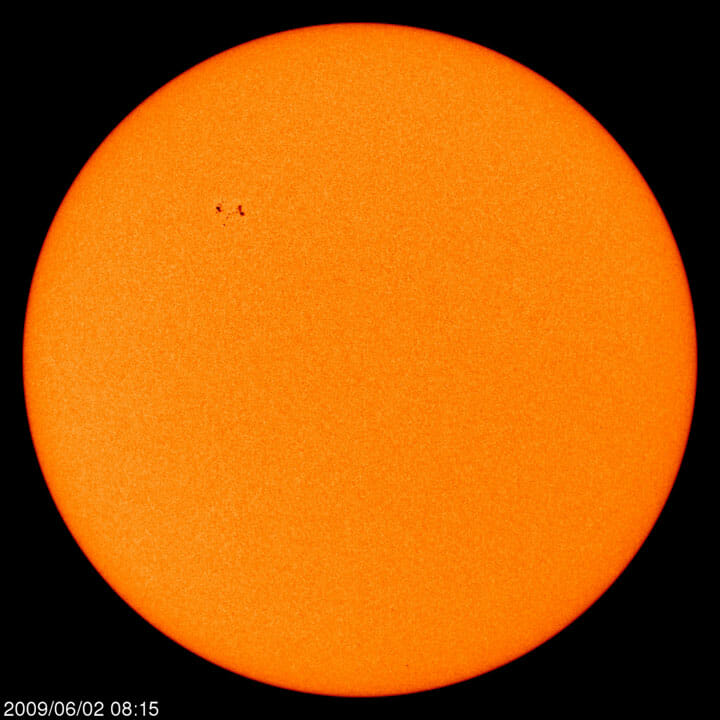 Everyone can breath a sigh of relief. The upcoming ice age that was predicted by deniers has been called off.  The cause of this  ice age was a lack of sunspots and a diminished solar output. But:

The sunspot cycle is about to come out of its depression, if a newly discovered mechanism for predicting solar cycles — a migrating jet stream deep inside the sun — proves accurate.  And that will add a small amount of warming in the next few years, which were already predicted to be record-setting by two recent studies.

When we last looked at the sun [please, don’t try that at home], we were at “a 12-year low in solar ‘irradiance’.”  As NASA explained in April:  “the sun’s brightness has dropped by 0.02% at visible wavelengths” since the solar minimum of 1996, which was “not enough to reverse the course of global warming.”  It’s been “the quietest sun we’ve seen in almost a century,” said sunspot expert David Hathaway of the Marshall Space Flight Center.

The deniers have been rooting for a Maunder Minimum to stifle global warming (which it wouldn’t have done anyway, see here).  But human-caused global warming is so strong that not bloody much stifling has been going on given that “this will be the hottest decade in recorded history by far,“ nearly 0.2°C warmer than the 1990s.  Heck, even with a La Niña and an unusually inactive sun, 2008 was almost 0.1°C warmer than the decade of the 1990s as a whole — and of course the 1990s were, at the time, the hottest decade in recorded history.  Changes in the sun just ain’t the big dog anymore when it comes to driving climate change

The NASA news release is here:

The sun is in the pits of a century-class solar minimum, and sunspots have been puzzlingly scarce for more than two years. Now, for the first time, solar physicists might understand why.

At an American Astronomical Society press conference today in Boulder, Colorado, researchers announced that a jet stream deep inside the sun is migrating slower than usual through the star’s interior, giving rise to the current lack of sunspots…

The jet stream is now, finally, reaching the critical latitude, heralding a return of solar activity in the months and years ahead.

One thought on “Ice age called off”