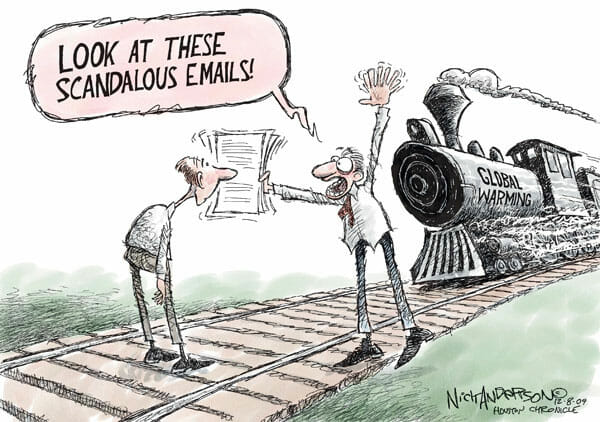 Once again, we see how empty the claims regarding the CRU emails truly are:

There was no scientific malpractice at the University of East Anglia’s Climatic Research Unit, which was at the centre of the “Climategate” affair.

This is according to an independent panel chaired by Lord Oxburgh, which was convened to examine the research published by the unit.

The panel’s main conclusions was:

We saw no evidence of any deliberate scientific malpractice in any of the work of the Climatic Research Unit and had it been there we believe that it is likely that we would have detected it. Rather we found a small group of dedicated if slightly disorganised researchers who were ill-prepared for being the focus of public attention. As with many small research groups their internal procedures were rather informal.

It doesn’t get clearer than this. The scientists at CRU were doing good science despite the denier claims to the contrary. In fact the panel goes so farther by saying that:

it seems that some of these criticisms show a rather selective and uncharitable approach to information made available by CRU. They seem also to reflect a lack of awareness of the ongoing and dynamic nature of chronologies, and of the difficult circumstances under which university research is sometimes conducted.

That much should be obvious to anyone who’s looked beyond the notoriously bad reporting on this issue. For those keeping score, this is the third investigation to conclude that the denier claims are baseless.

The report did make a few other points that are worth highlighting:

It was not the immediate concern of the Panel, but we observed that there were important and unresolved questions that related to the availability of environmental data sets. It was pointed out that since UK government adopted a policy that resulted in charging for access to data sets collected by government agencies, other countries have followed suit impeding the flow of processed and raw data to and between researchers. This is unfortunate and seems inconsistent with policies of open access to data promoted elsewhere in government.

Which was what James Annan noted when the inquiry by the British house of commons science and technology committee asked for more transparency. It is the government’s own policies that stifle the openness and transparency the government claims to want.

A host of important unresolved questions also arises from the application of Freedom of Information legislation in an academic context. We agree with the CRU view that the authority for releasing unpublished raw data to third parties should stay with those who collected it.

Most of the CRU data has been publicly available for years. As for the small percentage that wasn’t available (like Environment Canada data) CRU didn’t have the authority to release it. No amount of FOI requests change that basic fact.

And finally the point that the deniers are desperately clinging to:

We cannot help remarking that it is very surprising that research in an area that depends so heavily on statistical methods has not been carried out in close collaboration with professional statisticians. Indeed there would be mutual benefit if there were closer collaboration and interaction between CRU and a much wider scientific group outside the relatively small international circle of temperature specialists.

Watching the deniers claim that this is why they have been so angry (to the point of sending death threats!) is particularly amusing. Gavin at Real Climate said it best: “Watch those goalposts move! Let me be sure that I have your position correct: all of the noise, insults, threats, libel and cries of fraud, fabrication and misconduct are because you feel that more statisticians should have been coauthors on the CRU papers? Got it.”

There is, of course, something to be gained by subjecting the statistical methods of climatologists to more rigorous scrutiny, but expecting this scrutiny to cause drastic changes to our understanding of the climate system is absurd. As are the claims from deniers that this somehow justifies their behaviour.

Perhaps most amusing is watching deniers claim that these inquiries, which they previously trumpeted, are all part of the global warming conspiracy.

Deniers are not happy, but that was a forgone conclusion. Anything less than proof that Phil Jones and CRU manipulated the data and that man-made climate change is a myth and a fraud was guaranteed to make deniers unhappy.

UPDATE: Some deniers are truly scraping the bottom of the barrel here. It turns out that Lord Oxburgh rode a bicycle to the press conference, so obviously he cannot be trusted:

Surely Oxburgh’s choice of transport to the press conference on his Climategate findings should have made some journalists there wonder about his impartiality:

RON OXBURGH, breezily pushing his bicycle through a clot of journalists outside the press briefing he had just given, is a busy man happy to hurry.

Of course had he driven to the press conference the deniers would be all over him because, by driving he is indicating clearly that does not believe in the validity of the global warming or the science coming from CRU. Instead he is just paying lip service to it in order avoid angering the secret world government that is orchestrating the massive conspiracy.

UPDATE 2: Many deniers have jumped on some statements by David Hand:

Professor David Hand said that the research – led by US scientist Michael Mann – would have shown less dramatic results if more reliable techniques had been used to analyse the data.

He said the graph, that showed global temperature records going back 1,000 years, was exaggerated – although any reproduction using improved techniques is likely to also show a sharp rise in global warming. He agreed the graph would be more like a field hockey stick than the ice hockey blade it was originally compared to.

When I first read this statement, I was confused. The blade of the hockey stick graph the part of the graph where was have the most confidence, because it is confirmed by the instrumental record. We know that in the 20th century temperatures increased dramatically. That is not in question. Well a recent addendum to the Oxburgh panel report makes it clear that Hand’s words are being taken out of context:

For the avoidance of misunderstanding in the light of various press stories, it is important to be clear that the neither the panel report nor the press briefing intended to imply that any research group in the field of climate change had been deliberately misleading in any of their analyses or intentionally exaggerated their findings. Rather, the aim was to draw attention to the complexity of statistics in this field, and the need to use the best possible methods.

Another denier talking point shot down, (not that they ever cared about things like that).  This makes sense of course; Mann’s hockey stick has been replicated over 10 times by different groups using different data, and different techniques. A NAS report into the hockey stick concluded that it’s conclusion was correct. And contrary to the denier claims, It is the blade in which we have most confidence because it is during that time period where we have good direct measurement of temperatures.

And even if the hockey sticks (remember there are over 10 of them) are somehow shown to all be false, it still doesn’t mean a damn thing in regards to global arming.