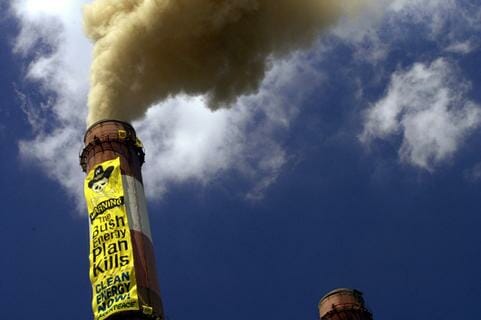 From edie.net “Tony Blair has questioned the effectiveness of target-based emissions reductions frameworks such as Kyoto, instead placing his faith in private-sector technology led models.

Concluding the meeting of G8 energy and environment ministers in London this week, Mr Blair said that incentives should be given for private sector investment in low carbon technology, and that partnerships needed to be developed that allowed technology transfer between developed and developing nations for emissions reduction.

However, these partnerships should develop on an informal basis, he said, “so that people don’t feel that pressure of international negotiation that sometimes can be helpful, sometimes frankly can be unhelpful, but nonetheless they are able in a frank and open way to explore what the possibilities are for action.””

It is looking more and more like any post Kyoto deal will be very watered down. The global climate depends on the absolute amount of greenhouse gasses in the atmosphere, it does not matter how much economic growth was achieved by those emissions the consequences would be the same.

Emissions intensities have been dropping since the start of the industrial revolution, and with very little change to current trends most of the voluntary goals in the Asia Pacific climate agreement would be met. So in essence this plan has been in effect for over 100 years, do you think it has worked? Has the climate change issue been resolved? The answer is of course NO.

I do recognize that new technologies will help to achieve emissions targets, but that does not negate the importance of those targets. What Blair is saying is that the U.S. led Asia Pacific climate agreement is the best way to fight climate change. Do not be fooled by this line of thinking, what we need is to reduce the absolute amount of greenhouse gasses, and the best way to achieve these goals is to set targets, and penalize those that do not meet them.