The longer we wait to cut emissions, the more drastic our emissions cuts will have to be in order to avoid catastrophic climate change. Had we listened to the warnings of scientists in the 80s the reductions needed would have have been relatively easy to achieve. Had we taken the emissions targets of the Kyoto protocol seriously, our task would have been easier. Instead we waited, and are now faced with a problem that seems insurmountable, yet tomorrow it will be even more difficult to solve.

The key problem in climate change is not the actual emissions in any given year. It’s the cumulative emissions over time. The carbon we emit by burning fossil fuels doesn’t magically disappear. About half is absorbed by the oceans (making them more acidic). The rest cycles back and forth between the atmosphere and the biosphere, for centuries. And there is also tremendous lag in the system. The ocean warms up very slowly, so it take decades for the Earth to reach a new equilibrium temperature once concentrations in the atmosphere stabilize. This means even if we could turn off emissions today, the earth would keep warming for decades, and wouldn’t cool off again for centuries. It’s going to be tough adapting to the warming we’re already committed to. For every additional year that we fail to get emissions under control we compound the problem.

What does this mean for targets? It means that it matters much more how soon we get started on reducing emissions rather than eventual destination at any particular future year. Because any reduction in annual emissions achieved in the next few years means that we save that amount of emissions every year going forward. The longer we take to get the emissions under control, the harder we make the problem. 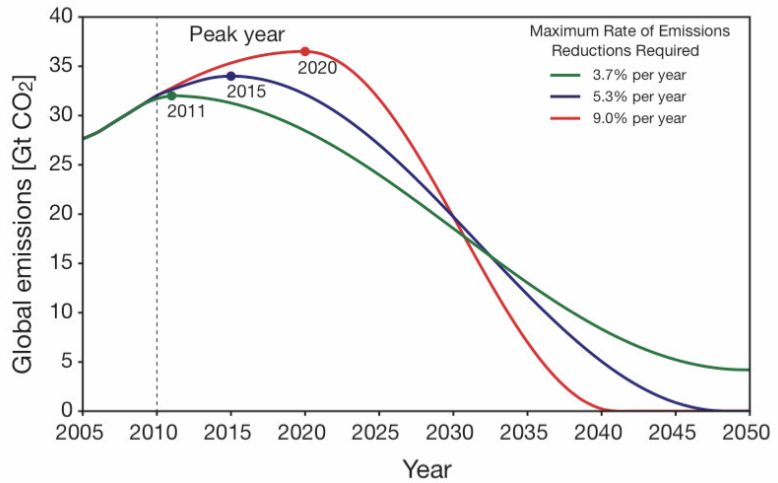 The thing is, there are plenty of good analyses of how to achieve early emissions reductions by deploying existing technology. Anyone who argues we should put our hopes in some grand future R&D effort to invent new technologies clearly does not understand the climate science. Or perhaps can’t do calculus.

We can’t afford to delay, the problem is already difficult enough to solve.