No of course not.

As I (and the researchers) stated when the predictions of an ice free north pole were made, whether or not the North pole became ice free this year would be largely meaningless, but rather it should be seen as a continuation of the rapid melting of the arctic sea ice. 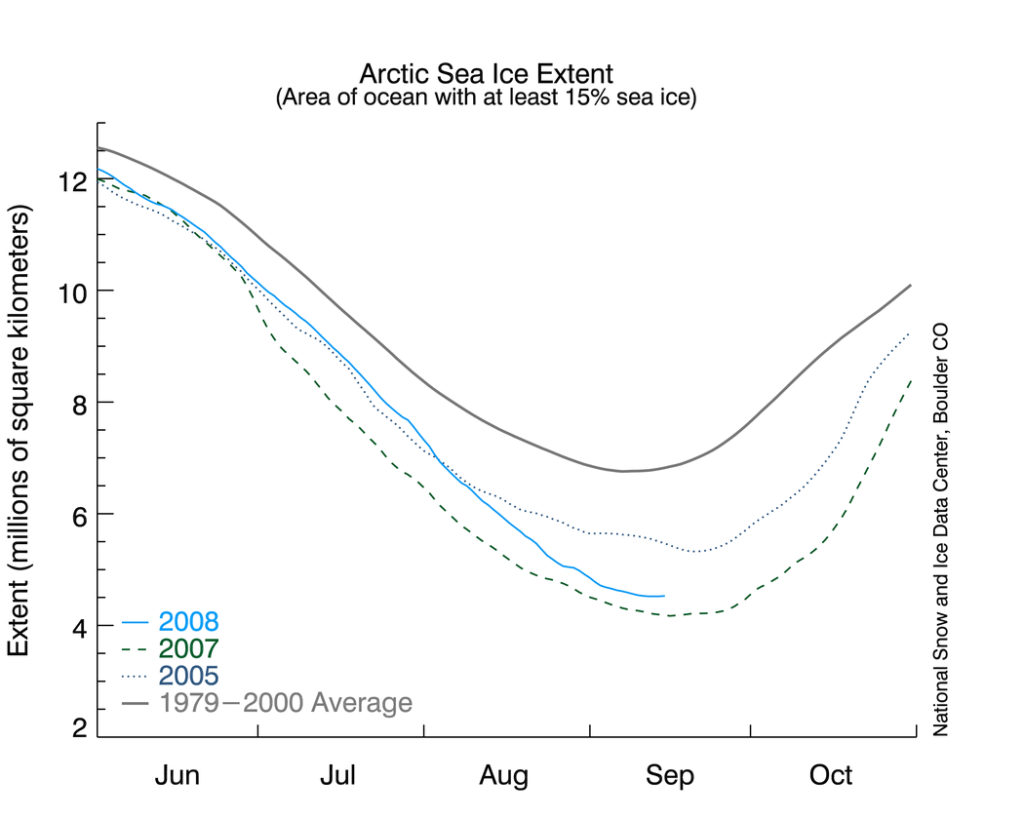 The 2008 melt season resulted in the second lowest annual seas ice minimum ever recorded. It was second only to last years record breaking melt. 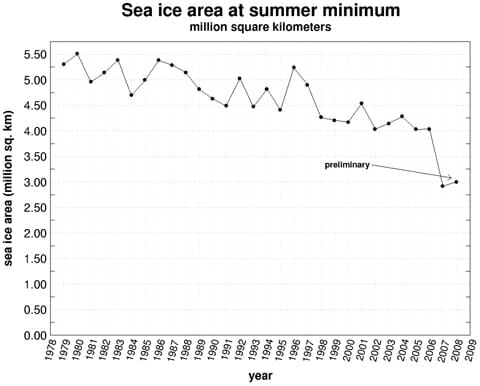 The bottom line as far as the Arctic is concerned, according to the NSIDC’s Walt Meier:

We’re kind of in a new state of the Arctic basically, and it’s not a good one. We’re definitely sliding towards a point where the summer sea ice will be gone.

And that is not a good trend. Just remember this next time a denier trumpets the fact that the north pole didn’t melt this year.

UPDATE: Coby, over at A Few Things Ill Considered does a thorough debunking of the dishonest denier claim that the arctic summer sea ice is recovering:

Sea ice at the north pole recovered a whopping 9.4% from 2007 to 2008 despite the doom and gloom predictions of the alarmists. Yet another wheel falls off the global warming bandwagon.

It is true that the minimum summer ice extent in the arctic ocean in 2008 was 9.4% higher than the minimun in 2007. But calling this a recovery is simply not justifiable, not even by a long shot. Firstly, at 4.52 million square kilometers, this measurement is 2.24 million square kilometers below the average minimum observed since 1979 when accurate satellite observations began, so we are nowhere near getting back to normal levels of ice cover. (Source: NSIDC) Secondly, year to year flucuations are very large and simply reflect the chaotic nature of weather, the change over a single year does not say anything meaningful about climate trends.

So what is the trend? 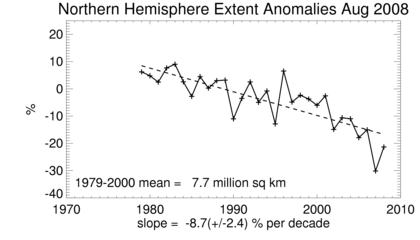 We can also see that 2007 was really an exceptional record setter and aside from that year, 2008 is lower than any other. This is hardly the “warming is over” news the climate denialist organisations and websites have been proclaiming or at least implying.

So that’s what has happened, but what were the “alarmist” expectations? It is true that a small number of media reports quoted people saying there might be another record this year, maybe even total ice loss (can anyone show me an actual prediction?), it makes a nice sensational headline after all, but if you look to climate science you see a predictive failure in precisely the opposite direction. No research papers from scientists in the field have been predicting ice loss at the rate it has been happening. Checking in the IPCC report from 2007, in the Summary for Policymakers[PDF] we find this on page 15:

“In some projections, arctic late-summer sea ice disappears almost entirely by the latter part of the 21st century.”

This is nowhere near a prediction of total summer ice loss by 2008 and it is looking more and more like it will be very wrong by being too conservative. This is not the hallmark of an “alarmist”!

So, I guess the reality is that 2008’s summer arctic ice extent observation is not a wheel off the GW bandwagon, it is one more nail in the coffin of denialism.