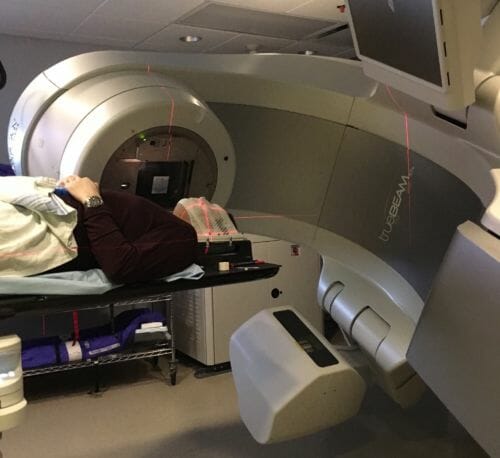 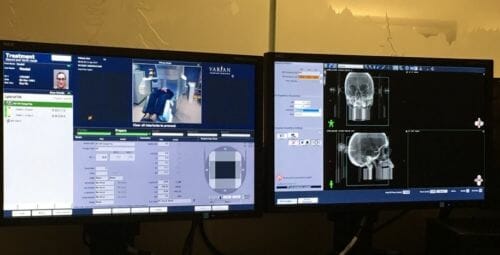 I would wake up and take my anti-anxiety medication and go to the treatment at the BC Cancer agency. I was usually the first or second patient of the day. The radiation treatment, itself, would only take a about 10 minutes, and most of that was setup and alignment. The radiation was only applied for a few minutes.

Unfortunately, during those 10 minutes I had to wear a mask that fully immobilized my head and jaw. This was the main reason for the anti-anxiety medication. It turns out I am slightly claustrophobic and having mask pressing down on my face preventing all movement from the neck up was more than enough to trigger the claustrophobia. The medications were mostly able to prevent any anxiety attacks while I was getting irradiated.

Then all I had to do was lay there while the technicians aligned the machine and zapped me with X-Rays. As the treatments went on my head started to swell; not enough to be very noticeable but enough for the mask to get tighter and more uncomfortable as the treatments progressed. There was a risk of some hair-loss, but either I didn’t loose any or I was hairy enough to begin with that the loss wasn’t noticeable.

Once I was done with the radiation, I went home and passed out for a few hours. I completely drained and couldn’t do anything else. Once I woke up I would head to work for a few hours (the hours at work became shorter and shorter as the treatments progressed; luckily everyone at work was understanding). Then I headed home for an evening of sitting on the couch watching TV.

On top of the absolute lack of energy The radiation leaves you feeling gross. I don’t really have any other words to describe the feeling. Your body just knows that something is wrong but can’t do anything about it.

It took almost 2 months for this feeling to go away, and my energy levels to return to normal.

Since then the symptoms caused by the tumour haven’t gone away and some have gotten worse. Some of this might be due to internal swelling causing increased pressure on the facial nerve. If this is the case then as the swelling decreases over the next several months some of the symptoms should as well.

Meanwhile the most difficult symptom to deal with is the tinnitus. I have constant 8kHz ringing in my ears that sounds like this:

This constant ringing is slowly driving me mad. It never goes away. It sometimes keeps me up at night. It is always there. I have forgotten what silence is like. White noise or music can help mask the tinnitus, but it is only somewhat effective because my ear canal is still blocked by the tumour so sounds that mask the tinnitus don’t make it to my inner ear where the ringing is created.

The specialists don’t really have a good answer about what is causing it and the treatment options are limited. It could be increased pressure on the cochlea by the tumour or by the internal the swelling, but they don’t think it is caused by the radiation. Any nerve damage caused by radiation would take years to become noticeable. Hopefully I wont have to find out what that is like.

There are other symptoms as well. My facial weakness has gotten worse and at best I am now only capable of a half-smile.

More worryingly my left eye no longer closes fully. Which means I am forced to sleep with one eye open.

The biggest danger of having an eye that you can’t close is that it has a tendency to dry out. Since it doesn’t close completely, my tears don’t fully hydrate the eye and if it dries out it could become permanently damaged.

I have drops, gels, and ointments that I apply several times a day to prevent this from happening, but heat, wind, and smoke; which Vancouver has had plenty of lately; all make this worse and I suspect that the cold dry air of winter will be also be problematic.

A couple of times when my eye has gotten dry enough, I have had to tape it shut to get some relief. 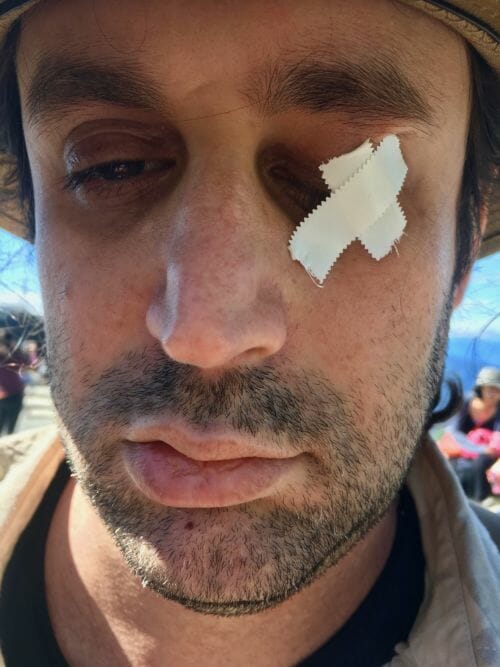 The long-term prognosis, is still largely unknown. A Facial Nerve Schwannoma is rare enough that the specifics of the final outcomes for an individual are impossible to know. I have already been warned that the tinnitus will likely never go away. It might calm down a little and in a few years my mind will somewhat adapt to the constant ringing, but it will still be there.

Hearing in my left ear is still very reduced. I don’t yet know if it will get better. The tumour may shrink (or it might not) but that doesn’t mean the ear cannel will open up, the scar tissue caused by the radiation could keep it blocked.

Ultimately the most likely outcome is that I don’t get worse, but I also don’t get any better.

This is assuming that the radiation treatment was successful.

And I don’t yet know if it was.

The odds are certainly in my favour. The success rate of the radiation treatment is about 90%. It is still far too early to tell if I fall in that 90%. I will get my first post radiation MRI scan in November where they will see what the tumour has done since it was irradiated, but have already been warned that November might too early to know if the treatment worked.

So I wait. Anxiously. For months.