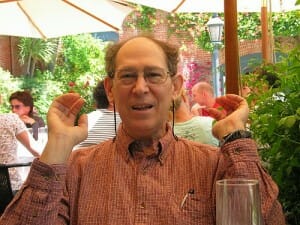 This morning, Stephen Schneider died of a heart attack. Schneider was one of the most well known and respected scientists studying the earths climate. He had an amazing ability to communicate the complexities of science in a manner accessible to all.

Perhaps most important of all his qualities, was the fact that he was not afraid to stand up for science and denounce denialism. This is something that is far too rare in the scientific community.

At Real Climate Ben Santer has written a touching eulogy:

Stephen Schneider did more than any other individual on the planet to help us realize that human actions have led to global-scale changes in Earth’s climate. Steve was instrumental in focusing scientific, political, and public attention on one of the major challenges facing humanity – the problem of human-caused climate change.

Some climate scientists have exceptional talents in pure research. They love to figure out the inner workings of the climate system. Others have strengths in communicating complex scientific issues to non-specialists. It is rare to find scientists who combine these talents.

Steve Schneider was just such a man.

Steve had the rare gift of being able to explain the complexities of climate science in plain English. He could always find the right story, the right metaphor, the right way of distilling difficult ideas and concepts down to their essence. Through his books, his extensive public speaking, and his many interactions with the media, Steve did for climate science what Carl Sagan did for astronomy…

Steve Schneider helped the world understand that the burning of fossil fuels had altered the chemistry of Earth’s atmosphere, and that this change in atmospheric composition had led to a discernible human influence on our planet’s climate. He worked tirelessly to bring this message to the attention of fellow scientists, policymakers, and the general public. His voice was clear and consistent, despite serious illness, and despite encountering vocal opposition by powerful forces – individuals who seek to make policy on the basis of wishful thinking and disinformation rather than sound science.

Steve Schneider epitomized scientific courage. He was fearless. The pathway he chose – to be a scientific leader, to be a leader in science communication, and to fully embrace the interdisciplinary nature of the climate change problem – was not an easy pathway. Yet without the courage of leaders like Stephen Schneider, the world would not be on the threshold of agreeing to radically change the way we use energy. We would not be on the verge of a global treaty to limit the emissions of greenhouse gases…

We honor the memory of Steve Schneider by continuing to fight for the things he fought for – by continuing to seek clear understanding of the causes and impacts of climate change. We honor Steve by recognizing that communication is a vital part of our job. We honor Steve by taking the time to explain our research findings in plain English. By telling others what we do, why we do it, and why they should care about it. We honor Steve by raising our voices, and by speaking out when powerful “forces of unreason” seek to misrepresent our science. We honor Steve Schneider by caring about the strange and beautiful planet on which we live, by protecting its climate, and by ensuring that our policymakers do not fall asleep at the wheel.

Stephen Schneider will be deeply missed.