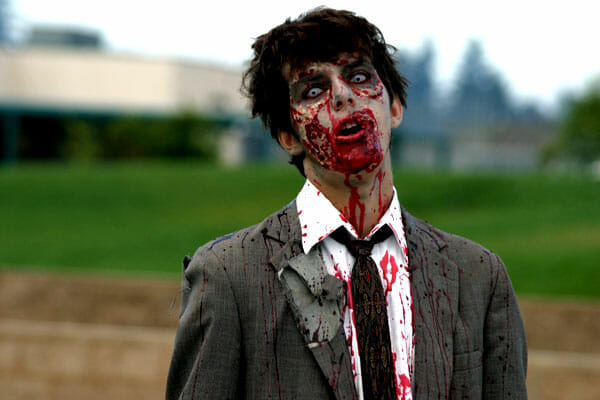 A new scientific paper written by a group of Canadian researchers is great cause for alarm:

Zombies are a popular figure in pop culture/entertainment and they are usually portrayed as being brought about through an outbreak or epidemic. Consequently, we model a zombie attack, using biological assumptions based on popular zombie movies. We introduce a basic model for zombie infection, determine equilibria and their stability, and illustrate the outcome with numerical solutions. We then refine the model to introduce a latent period of zombification, whereby humans are infected, but not infectious, before becoming undead. We then modify the model to include the effects of possible quarantine or a cure. Finally, we examine the impact of regular, impulsive reductions in the number of zombies and derive conditions under which eradication can occur. We show that only quick, aggressive attacks can stave off the doomsday scenario: the collapse of society as zombies overtake us all.

By using an infectious disease model they conclude that, absent a cure, only several massive  eradication programs that simultaneously eliminate large portions of the zombie population will stave off the zombie apocalypse.

And you were worried about swine flu. Ha!

Thankfully this is the apocalypse I am most prepared for.

3 thoughts on “The zombie apocalypse”