It turns out that mitigation is not the economy-destroying expense that many deniers would like us to believe:

The costs of doing something about climate change are the subject of much debate these, and Canada is no exception. The federal government, like the ones before it, has shown little interest in honest analysis, so one of the country’s biggest banks, TD Bank, decided to pay for a study all on its own. The results, which the bank’s economists call “robust,” represent perhaps the most comprehensive effort to nail down those costs, at least for one country. And what did the consultants they hired to write the report find? Good news, actually…

According to the study, which was prepared by the Pembina Institute and the David Suzuki Foundation, with significant input from the economics modeling team at M.K. Jaccard and Associates, Canada makes it to 2020 pretty well, overall, even if it implements serious emissions-reductions laws — the kind consistent with a global strategy required to keep average temperatures from rising more than 2 °C above pre-industrial levels.

The article goes on to mention that while Canada as a whole does quite well, the tar sands don’t, which may make taking action difficult, at least politically.

But the studies projections are inline with what has been shown elsewhere:

Ask a random sample of journalists whether our top scientists agree on the basics of climate science, and they’ll surely say yes: Greenhouse gasses are warming the Earth, man is the cause, and we have to reduce emissions, or else. But ask the same journalists whether our top economists agree on the basics of climate economics—the costs and benefits of addressing the problem—and they’ll almost certainly say no: There’s no comparable consensus among economists.

But that simply isn’t true, and it’s time for the press and public to recognize it. There is an emerging economic consensus about the cost of climate action, but most journalists have failed to notice it, so the public doesn’t know it exists…

If you look closely at what climate economists are saying, you can discern two areas of basic agreement. First, there is a broad consensus that the cost of climate inaction would greatly exceed the cost of climate action—it’s cheaper to act than not to act. Reducing greenhouse gas emissions by moving to alternative energy sources and capturing carbon from coal-fired power plants will cost less in the long run than dealing with the effect of rising sea levels, drought, famine, wildfire, pestilence, and millions of climate refugees. (There are some outliers who disagree with this—Danish statistician Bjorn Lomborg comes to mind—and some respected economists, like William Nordhaus, who argue that future, richer generations will be able to more easily shoulder the cost burden than we can.) But influential mainstream economists from Paul Volcker to Robert Stavins to Lord Nicholas Stern to Larry Summers all agree that action is cheaper than inaction, even if they disagree on much else (Stavins can’t stand Stern’s methodology; Summers prefers a carbon tax to cap-and-trade). Stavins, director of Harvard’s Environmental Economics Program, phrased it this way in a recent paper: “There is general consensus among economists and policy analysts that a market-based policy instrument targeting CO2 emissions … should be a central element of any domestic climate policy.”

The second area of consensus concerns the short-term cost of climate action—the question of how expensive it will be to preserve a climate that is hospitable to humans. The Environmental Defense Fund pointed to this consensus last year when it published a study of five nonpartisan academic and governmental economic forecasts and concluded that “the median projected impact of climate policy on U.S. GDP is less than one-half of one percent for the period 2010-2030, and under three-quarters of one percent through the middle of the century.” (That’s a lot of money—U.S. GDP in 2007 was $13.8 trillion—but Stavins has estimated the cumulative cost of all U.S. environmental regulation to date at 1 percent of GDP, and it has not been an insupportable burden.) Stavins’ climate-cost calculations come in a bit higher than those in the EDF study, ranging from less than 0.5 percent to 1 percent of U.S. GDP; he describes these as “signiﬁcant but affordable impacts” that are “consistent with ﬁndings from other studies.” The Stern Review on the Economics of Climate Change, an influential but controversial 2006 report for the British government, concluded that climate action would cost 1 percent of global GDP (though Stern now warns that our failure to act is raising the price tag) and that inaction could reduce global GDP by up to 20 percent.

You can’t take any of these forecasts to the bank—economic models are notoriously bad at predicting the future—but by aggregating them, as EDF did, you can get a general idea of the impact of climate action. It won’t be free. And it won’t be anywhere near as bad as the economic contraction we’re living through right now, in which U.S. GDP fell by 3.8 percent in the fourth quarter of 2008 alone.

A consensus among economists does, in fact, exist. Just not the consensus the denialosphere would like people to believe.  Earlier this week, J. Scott Holladay, Jonathan Horne, and Jason A Schwartz from NYU’s Institute for Policy Integrity published a survey of economists on climate change entitled “Economists Climate Change: Consensus and Open Questions.” Their findings support an under-reported piece by Eric Pooley from early this year about the failure of the media to accurately convey the economic position on mitigation. 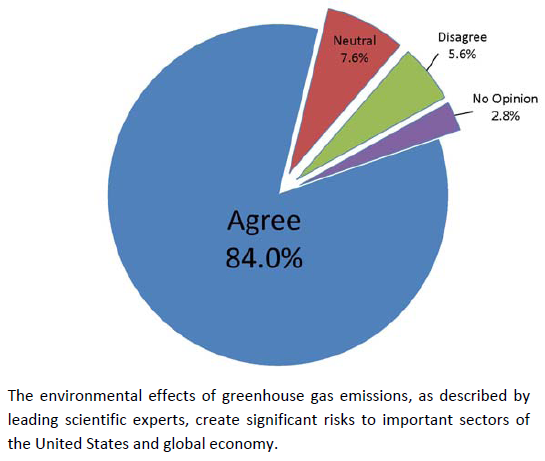 The survey also found that there is no consensus that the future costs and benefits of climate change policy should be discounted at a constant rate, with an equal number saying that alternative discount methodologies should be used, and a significant percentage stating that alternative moral inquires were the most appropriate way to approach intergenerational questions.

That last bit is striking. There are those who fancy themselves non-denialists who oppose mitigation on economic grounds based upon narrow readings of economists like Nordhaus- Jim Manzi comes to mind. Manzi and others’ argument against action essentially hinges on the discount rates assumed, portraying their analyses’ choices as mainstream. This survey reveals that rather than being mainstream, there is no consensus on Nordhausian let alone constant discount rates, and those favoring non-constant rates discounted the cost of climate change at a substantially lower rate (i.e. more heavily favoring expenditure now rather than passing the costs off to future generations).

The third finding listed above, though, is the one that needs to be driven home to policy makers. Politicians are fond of stating that they need more certainty before they are willing to get on board with mitigation efforts, while economists overwhelmingly conclude the opposite- uncertainty increases, rather than decreases, the value of mitigating now.

So given that the costs of mitigation seem entirely manageable, while the costs of inaction seem catastrophic, why have mitigation policies not taken off? Why don’t politicians understand that uncertainty increases the need for mitigation, rather than decreases it?

Why is the concept of a little short-term pain, for long-term gain so alien to politicians? And what will it take for them to change their attitudes?