Here we go again, for another round of misrepresenting Mojib Latif’s work showing a levelling off of temperature followed by rapid warming. This time it was kicked off by the cold spell over parts of Europe and North America. But it is worth noting that the Arctic is much warmer than usual, and it is rather warm here in Vancouver as well, so much so that there are worries about there being a snow shortage for the upcoming Winter Olympics.

Take a look at the above graph, what do you see? Does it look like a cooling trend? Nope, but according to the crack reporters (or is that reporters on crack?) over at the Daily Mail it certainly does show cooling. 30 years of cooling, perhaps even a mini-ice age!

Could we be in for 30 years of global COOLING?

The world has entered a ‘cold mode’ which is likely to bring a global dip in temperatures which will last for 20 to 30 years, they say…

The research has been carried out by eminent climate scientists, including Professor Mojib Latif. He is a leading member of the UN’s Intergovernmental Panel on Climate Change.

He and his colleagues predicted the cooling trend in a 2008 paper, and warned of it again at an IPCC conference in Geneva in September.

And, because one article isn’t enough, we have an another even more error filled article in the Daily Mail:

The bitter winter afflicting much of the Northern Hemisphere is only the start of a global trend towards cooler weather that is likely to last for 20 or 30 years, say some of the world’s most eminent climate scientists [aka Latif]…

The scientists’ predictions also undermine the standard climate computer models, which assert that the warming of the Earth since 1900 has been driven solely by man-made greenhouse gas emissions and will continue as long as carbon dioxide levels rise.

That last paragraph should be enough for any reader with even a basic  understanding of the science to stop trusting anything said in the article. No single model says that the warming trend “since 1900 has been driven solely by man-made greenhouse gas emissions”. Climate models take into account many climate forcings (including but not limited to GHG emissions). In fact up until the 70s much of the temperature trends could be explained without GHG emissions. But apparently the Daily Mail isn’t one to let reality get in the way of a good story.

Anyways back to the topic at hand.

The paper referenced by the first Daily Mail article, is “Advancing decadal-scale climate prediction in the North Atlantic sector” and is the source for for the above graph. How on earth does one get a cooling trend from the above graph?

But as is usual for such stories, fact checking is no impediment for them to spread amongst the usual suspects:

Latif thinks the cold snap Americans have been suffering through is only the beginning. He says we’re in for 30 years of cooler temperatures — a mini ice age, he calls it, basing his theory on an analysis of natural cycles in water temperatures in the world’s oceans.

IPCC scientist [Latif]: Global cooling headed our way for the next 30 years?

Again take a look at the above graph, does it show cooling?

But it might be a good idea to see what Latif actually has to say. So Joe Romm asked him:

He had me reread the quotes attributed to him a number of times, asking twice, “those are direct quotes?” After I did, he said to me:  “I don’t know what to do.  They just make these things up.”  I suggested asking reporters to read quotes back to him.

According to Latif, over a short time span, say, two decades, it’s hard to determine exactly what fraction of the temperature change is due to what cause, but Latif does not believe nor ever said what the Daily Mail suggests, which is that you can add those periods together and somehow negate the IPCC’s finding.  His work simply “does not allow one to make any inferences about global warming.”

Latif has NOT predicted a cooling trend — or a “decades-long deep freeze” –  but rather a short-time span where human-caused warming might be partly offset by ocean cycles, staying at current record levels, but then followed by “accelerated” warming where you catch up to the long-term human-caused trend.  He does NOT forecast 2 or 3 decades of cooling.

Furthermore Latif has no confidence in his ‘forecast’ past 2015. This is cutting edge science, the uncertainties are substantial:

But, again, as Latif will happily tell anyone who asks, “my only forecast is to 2015.”  He insists he told the Daily Mail that you can’t draw any inferences from the recent cold snap, and he told me “I can’t really predict two decades in the future.”

The Mail on Sunday article said that Latif’s research showed that the current cold weather heralds such “a global trend towards cooler weather”.

It said: “The BBC assured viewers that the big chill was was merely short-term ‘weather’ that had nothing to do with ‘climate’, which was still warming. The work of Prof Latif and the other scientists refutes that view.”

Not according to Latif. “They are not related at all,” he said. “What we are experiencing now is a weather phenomenon, while we talked about the mean temperature over the next 10 years. You can’t compare the two.”

He said the ocean temperature effect was similar to other natural influences on global temperature, such as volcanos, which cool the planet temporarily as ash spewed into the atmosphere reflects sunlight.

“The natural variation occurs side by side with the manmade warming. Sometimes it has a cooling effect and can offset this warming and other times it can accelerate it.” Other scientists have questioned the strength of the ocean effect on overall temperature and disagree that global warming will show the predicted pause…

The recent articles are not the first to misrepresent his research, Latif said. “There are numerous newspapers, radio stations and television channels all trying to get our attention. Some overstate and some want to downplay the problem as a way to get that attention,” he said. “We are trying to discuss in the media a highly complex issue. Nobody would discuss the problem of [Einstein’s theory of] relativity in the media. But because we all experience the weather, we all believe that we can assess the global warming problem.”

Was it too much trouble for the Daily Mail, Fox News and Anthony Watts to verify with Latif that they were accurately representing his work. Of course it was, because Latif’s work is contrary to the point of view they wish to push.

Here is Latif in his own words, and the misrepresentations of his work by the usual suspects:

And it worth mentioning that such temporary plateaus (or even slight cooling) are completely consistent with climate models. Individual model runs routinely show short term trends that are not consistent with the longer warming trend 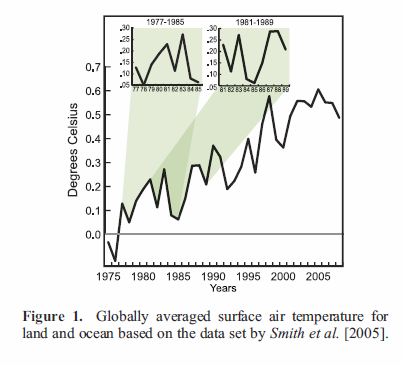 But don’t expect this denier myth to die anytime soon. They have constructed a monotonic straw man, and they take great pride in tearing it down as often as possible.

Given all the warnings about and plans to forestall global warming, people may be surprised to find,over the next several years that, over parts of the Northern hemisphere, summers are no warmer than before, maybe even a bit cooler–and that winters are as cold, or a bit colder, than they have been in the past couple of decades.

This is because the climate may go through a temporary halt in warming.  It’s nothing unusual, just a natural fluctuation. It doesn’t mean that global warming is not still at work, or that we no longer need to worry about global temperatures rising by as much as 6°C by the end of the century — an unprecedented warming in the history of mankind if no measures are taken to cut global carbon dioxide emissions. The only problem is that by considering the mean of many models of global warming, the natural fluctuations are averaged out, if they were not initialized by the current climate state, and this can be confusing…

The past record of globally averaged surface air temperature illustrates how gradual warming and short-term fluctuations can operate side by side. The temperature ups and downs superimposed on the 20th century warming trend reflect the natural variability. To some extent, we need to ignore these fluctuations, if we want to detect the human influence on climate.

Consider, for instance, the mid-century warming that was observed from 1930 to 1940. Had forecasters extrapolated into the future, they would have predicted far more warming than actually occurred.  Likewise, a brief cooling trend, if used as the basis for a long-range forecast could erroneously support the idea of a rapidly approaching ice age.

Natural climate variations may be produced by the climate system itself. A well-known example is El Niño, a warming of the Equatorial Pacific occurring on average about every 4 years. The record El Niño 1997/1998 helped to make 1998 the warmest year to date. The last year happened to be a moderate El Niño year, one reason, for instance, for the weak hurricane season in 2009. Volcanic eruptions and fluctuations in solar output can also bring temporary climate change. The Philippine volcano Mt. Pinatubo caused a temperature drop in 1991. And an increase of the solar radiation reaching the earth contributed to the mid-century warming.

We predict the coming years may see two natural oscillations, the Pacific Decadal and the Atlantic Multidecadal Oscillation, swinging into their negative phase, leading to a cooling of sea surface temperatures in large parts of both the Pacific and Atlantic.  A temporary halt in the global warming trend may be the consequence — nothing surprising to a climate scientist.

It is also possible that the current El Niño, combined with the long-term warming trend, takes us to record temperatures this year — again, nothing surprising to a climate scientist.