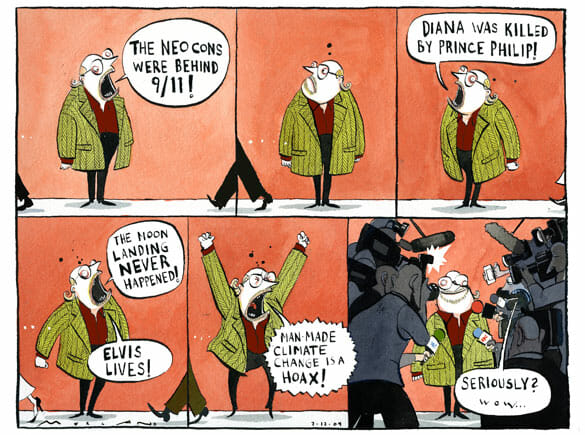 Joe Romm brings word that the Wall Street Journals, the New York Times, and the Washington Post, who all have no trouble  printing denier non-sense, rejected printing the open letter signed by over 250 members of the National Academy of Sciences.

The lead author, Pacific Institute President Peter Gleick had this to say:

We sent it first as an op-ed (one at a time, in order) to the WSJ, then the NY Times, then the Post. Each rejected it. No reasons given (they don’t usually). We then took it to Science, rather than try other smaller circulation newspapers. They agreed, and as you know, ran it on May 7th. The media coverage has been substantial, though mostly electronic media. And in terms of “mainstream media” more attention was given OUTSIDE of the US than inside — so some of the major papers in the UK, Canada, New Zealand, Portugal, but not here.

This is the situation we find ourselves in. Supposedly reputable newspapers routinely publish articles that are demonstrably incorrect, yet refuse to publish articles written and endorsed by scientists that aim to correct these inaccuracies.

We live in a society exquisitely dependent on science and technology, in which hardly anyone knows anything about science and technology. This is a clear prescription for disaster. It’s dangerous and stupid for us to remain ignorant about global warming, say, or ozone depletion, toxic and radioactive wastes, acid rain.

The newspapers who refused to publish the letter are doing their part to ensure that we remain ignorant about science.

The question is why? And more importantly what can be done to remedy the situation?