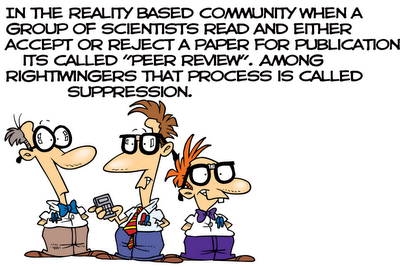 Did the Obama EPA really silence a dissenting report on global warming? Yes they did. But before anyone gets bent out of shape over this, it is worth noting that that is exactly what the EPA should have done.

The report in question has been called a scientific report by many, but it is nothing of the sort.  It was written by an economist (Alan Carlin), not a climatologist, that plagiarized fully debunked denier talking points. In short it was anything but a scientific report, and the EPA, being a scientific agency, had no business publishing it.

At first this story seemed dead it the water (where it belongs) and I wasn’t going to write anything on the subject, but sure enough the usual sources have been making enough noise that denier friendly outlets in the media started picking up on this.

So lest anyone be confused as to the real story behind the silenced report I thought I would write a quick post on the subject.

As Chris Mooney points out none of this should be surprising:

It was probably inevitable. Given the mileage progressives got out of slamming the Bush administration for abusing science, conservatives were bound to bring parallel charges against the Obama administration.

But true to their anti-science form, deniers forgot the most important aspect of any censorship claim: substance.

In their zeal to find a “war on science” episode to claim as their own, however, these conservatives forgot one essential matter: substance. If the claims about climate science in Carlin’s report—co-authored with another EPA employee from the same office, John Davidson—aren’t plausible; if leading climate scientists do not accept them; if they lack all credibility; then where there’s smoke there’s no fire. For not only would the EPA be correct to reject Carlin’s claims on substantive grounds, but indeed, as an expert scientific agency it would be bound by its mandate to do so.

Here’s where conservatives’ claims absolutely falls apart. Carlin is, as has constantly been pointed out in the aftermath of McCullagh’s article, an economics expert, not a climate scientist. And as climate scientists have considered his claims, they have withered.

The report makes the following claims:

Pretty damning stuff? If only those know-it-all climatologists had listened to economists this whole global warming thing could have been prevented. Gavin Schmidt over at Real Climate has the details:

From this “evidence”, they then claim that all variations in climate are internal variability, except for the warming trend which is caused by the sun, oh and by the way the globe is cooling.

One can see a number of basic flaws here; the complete lack of appreciation of the importance of natural variability on short time scales, the common but erroneous belief that any attribution of past climate change to solar or other forcing means that CO2 has no radiative effect, and a hopeless lack of familiarity of the basic science of detection and attribution.

But it gets worse, what solid peer reviewed science do they cite for support? A heavily-criticised blog posting showing that there are bi-decadal periods in climate data and that this proves it was the sun wot done it. The work of an award-winning astrologer (one Theodor Landscheidt, who also thought that the rise of Hitler and Stalin were due to cosmic cycles), a classic Courtillot paper we’ve discussed before, the aforementioned FoS web page, another web page run by Doug Hoyt, a paper by Garth Paltridge reporting on artifacts in the NCEP reanalysis of water vapour that are in contradiction to every other reanalysis, direct observations and satellite data, a complete reprint of another un-peer reviewed paper by William Gray, a nonsense paper by Miskolczi etc. etc. I’m not quite sure how this is supposed to compete with the four rounds of international scientific and governmental review of the IPCC or the rounds of review of the CCSP reports….

They don’t even notice the contradictions in their own cites. For instance, they show a figure that demonstrates that galactic cosmic ray and solar trends are non-existent from 1957 on, and yet cheerfully quote Scafetta and West who claim that almost all of the recent trend is solar driven! They claim that climate sensitivity is very small while failing to realise that this implies that solar variability can’t have any effect either. They claim that GCM simulations produced trends over the twentieth century of 1.6 to 3.74ºC – which is simply (and bizarrely) wrong (though with all due respect, that one seems to come directly from Mr. Gregory). Even more curious, Carlin appears to be a big fan of geo-engineering, but how this squares with his apparent belief that we know nothing about what drives climate, is puzzling. A sine qua non of geo-engineering is that we need models to be able to predict what is likely to happen, and if you think they are all wrong, how could you have any faith that you could effectively manage a geo-engineering approach?

Finally, they end up with the oddest claim in the submission: That because human welfare has increased over the twentieth century at a time when CO2 was increasing, this somehow implies that no amount of CO2 increases can ever cause a danger to human society. This is just boneheadly stupid.

So in summary, what we have is a ragbag collection of un-peer reviewed web pages, an unhealthy dose of sunstroke, a dash of astrology and more cherries than you can poke a cocktail stick at. Seriously, if that’s the best they can do, the EPA’s ruling is on pretty safe ground.

If I were the authors, I’d suppress this myself, and then go for a long hike on the Appalachian Trail…

It is no wonder this report was quashed. Now compare that to the instances of real science being quashed by the Bush administration.  Despite what some have claimed, the two aren’t remotely the same thing.

Alan Carlin [the author of this report] is simply not James Hansen, arguably the most famous of many scientists who claimed to have had their work suppressed or in some way interfered with during the Bush administration. You will recall that the Bush administration had taken a stance critical of mainstream climate science; Hansen felt compelled to defend it; and then NASA underlings interfered with his access to the media. That’s a vastly different story from the present one: The Obama administration has taken a stance aligned with mainstream climate science; Carlin is criticizing it; and his scientific claims are not standing up very well. Of course the Environmental Protection Agency can’t use them to help make policy. According to the EPA, Carlin’s claims were, in fact, considered—and rejected.

This shouldn’t have ever been a major story. The fact that it has gotten this amount of press is indicative of the disregard for logic and truthfulness of the denialsphere.

UPDATE: Chris Mooney makes the point that the Obama administration isn’t immune from conducting its own war on science.

All of which is not to discount the possibility that a real science scandal could emerge under the Obama administration. I rather doubt it will happen on global warming, but surely there could be a scientific issue where a dissenter within the administration advances scientific claims with quite a great deal of merit to them, only to find these claims disregarded or, worse, interfered with in some way. If that happens, I and many others will criticize the administration for it. But first there will have to be some scientific substance to the whistleblower’s case; the claims should be, at minimum, seriously arguable based on the latest and best science. That’s something conservatives have flagrantly failed to understand in the present instance.

It’s precisely that disregard for scientific substance, of course, which explains why they could perpetrate a “war on science” in the first place.

UPDATE 2: Peter Sinclair sums up the situation nicely in his Climate Crock of the Week video series:

2 thoughts on “Did the EPA really silence a dissenting report on global warming?”