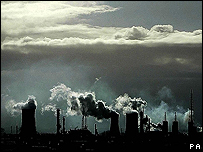 The Harper government has rejected a new report that calls for the introduction of a levy on pollution to be coupled with a 50% income tax break for the average Canadian.

The report, released on Monday by environmentalist David Suzuki and economist Mark Jaccard who heads a consulting firm that conducted the study, suggests that a levy on greenhouse gas emissions — also called a carbon tax — could be phased in, generating between $53-billion to $103.1-billion in new revenues without increasing the tax burden of the population.

Instead of implementing effective policy to deal with this issue the Conservatives have done absolutely nothing. When presented with this proposal they outright refused, and instead decided to stick to their ‘plan’ to reduce greenhouse gas emissions intensity, which will do absolutely nothing to reduce Canada’s absolute emissions levels.

But a spokesperson for Environment Minister John Baird immediately rejected Suzuki’s proposal, explaining that the government would stick with its own plan to cap pollution from large industrial facilities that requires them to reduce emissions per unit of production.

No one really expected the Harper Conservatives to seriously consider a Carbon tax, but I did not expect them to be so disingenuous.

“The government believes that Canadian families pay enough in tax,” said Baird’s director of communications, Garry Keller. “They don’t need another tax imposed on them, especially a $50-billion tax. Our focus is on regulating big polluters, because this government believes in the polluter pays principle.”

Perhaps the government should spend some time actually reading over this proposal instead of denouncing it outright. If they had they surely would have noticed the sections of this report that call for this carbon tax to be revenue neutral. If the Conservatives don’t want to implement a Carbon tax, they should at least be honest about their reasons for not doing so.

What Canada (and the rest of the world) needs is real leadership on this issue, and it has become increasingly clear that such leadership will not be found with the Harper Conservatives.