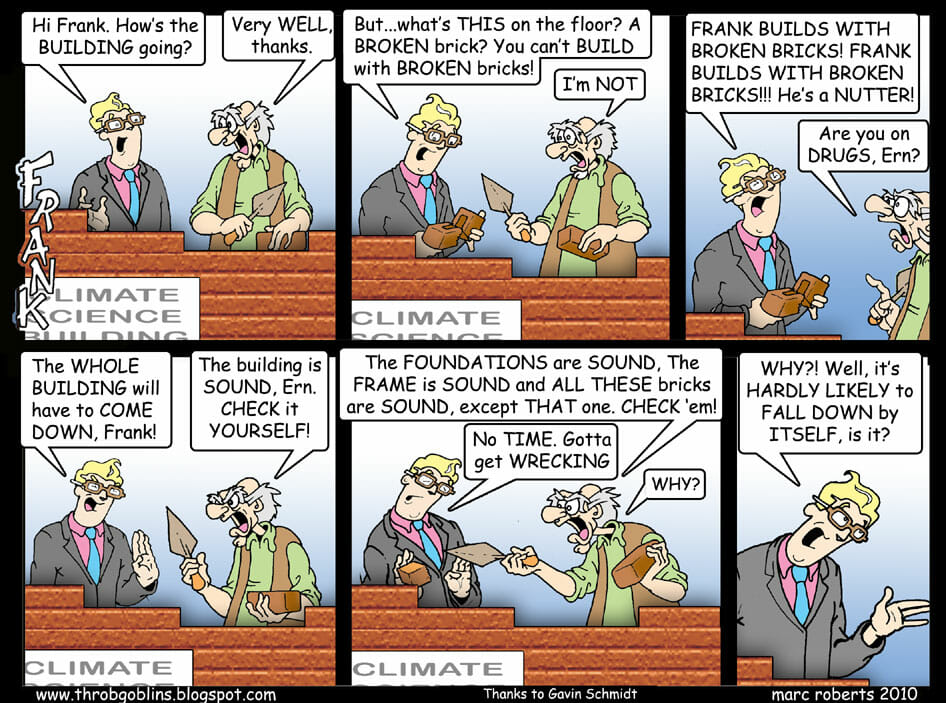 Despite denier’s hyperbolic claims that the CRU email leak was the “final nail in the coffin of global warming science”, ”the abject corruption of climate science” and “a scandal that is one of the greatest in modern science” and in what should come as no surprise to anyone who has scraped beyond the surface of this saga, CRU and Phil Jones have been cleared of wrong doing (perhaps now the death threats can stop). This may however come as a surprise to those who’s only exposure to this whole affair was with reporters who were more interested in maintaining a sellable narrative, than reporting the truth.

The inquiry by the British house of commons science and technology committee has cleared Jones and CRU, saying that ‘there is no case to answer’:

Conclusion 1:  The focus on Professor Jones and CRU has been largely misplaced. On the accusations relating to Professor Jones’s refusal to share raw data and computer codes, we consider that his actions were in line with common practice in the climate science community. We have suggested that the community consider becoming more transparent by publishing raw data and detailed methodologies. On accusations relating to Freedom of Information, we consider that much of the responsibility should lie with UEA, not CRU.

Conclusion 2:  In addition, insofar as we have been able to consider accusations of dishonesty—for example, Professor Jones’s alleged attempt to “hide the decline”—we consider that there is no case to answer. Within our limited inquiry and the evidence we took, the scientific reputation of Professor Jones and CRU remains intact. We have found no reason in this unfortunate episode to challenge the scientific consensus as expressed by Professor Beddington, that “global warming is happening [and] that it is induced by human activity” It was not our purpose to examine, nor did we seek evidence on, the science produced by CRU. It will be for the Scientific Appraisal Panel to look in detail into all the evidence to determine whether or not the consensus view remains valid.

Conclusion 3:  A great responsibility rests on the shoulders of climate science: to provide the planet’s decision makers with the knowledge they need to secure our future. The challenge that this poses is extensive and some of these decisions risk our standard of living. When the prices to pay are so large, the knowledge on which these kinds of decisions are taken had better be right. The science must be irreproachable.

This, much like the inquiry that cleared Michael Mann, is a clear repudiation of the claims made against CRU and Phil Jones.

The one issue that the inquiry took some issue with is the fact that it is not common practice to release every single line of computer code used in generating the results. Expect this aspect of the report to be trumpeted by deniers who conveniently ignore the rest of the conclusions.

In practice openness is important, but in reality achieving it is non–trivial.

Intellectual property issues aside (which are a large enough issue on their own) it is the government’s own policies that make more openness difficult:

The bottom line is (or certainly was, when I worked there) that NERC employees are under pressure to sell anything that can be sold. And if someone asks for something, that means it must surely be worth something, right? Of course this is an attitude that the scientists – who know that they can’t really get any significant price for their work – have always implacably opposed, but we don’t really count for much when the politicians are demanding budget cuts and percentage returns on investment.

Obviously this policy is not conducive to openness. In essence the governmental inquiry was criticizing the government itself, and rightly so. This isn’t an issue that exists only in the UK. Here at home Environment Canada has been reluctant to allow CRU to publish the data it uses from Canada. And it is not alone.

As for the FOI requests, the BBC’s Richard Black sums it nicely:

The vast majority of the raw data that UEA had been accused of hiding had in fact been freely available for years, the MPs found, while accepting the explanations Professor Jones has been giving for years as to why the few bits that remain could not at the time have been published.

There are implications for the government – re-framing bits of the Freedom of Information Act – for academic institutions – the need to properly resource areas tasked with responding to FoI requests – and for the media, with implicit references to a rush to judgement on the part of some journalistic institutions.

The scientists working at CRU, were inundated by FOI requests so much so that even denying them would have been an enormous task that took them away from the science they are paid to do:

Last year in July alone [CRU]  received 60 FoI requests from across the world. With a staff of only 13 to cope with them, the demands were accumulating faster than they could be dealt with. “According to the rules,” says Jones, “you have to do 18 hours’ work on each one before you’re allowed to turn it down.” It meant that the scientists would have had a lot of their time diverted from research…

He also suspected that the CRU was the target of a co-ordinated attempt to interfere with its work — a suspicion that hardened into certainty when, over a matter of days, it received 40 similar FoI requests. Each applicant asked for data from five different countries, 200 in all, which would have been a daunting task even for someone with nothing else to do.

There was no way the people at CRU could have dealt with the flood of FOI requests (this may have been the point), but ignoring them was not the proper thing to do, as Phil Jones himself has admitted. That being said, I have no idea what the proper course of action should have been. Clearly academic institutions subject to FOI requests need support to properly deal with the requests; that lack of support backed Phil Jones into a corner and in his frustration he sent some regrettable emails.

But despite all of this the inquiry had this to say:

Even if the data that CRU used were not publicly available—which they mostly are—or the methods not published—which they have been—its published results would still be credible: the results from CRU agree with those drawn from other international data sets; in other words, the analyses have been repeated and the conclusions have been verified.

Which re-enforcers an essential point: it is replication (not repetition) that strengthens confidence in scientific conclusions. Repetition tells us very little, replication (especially when approaching the problem from a different angle) gives us confidence in the results.

Of course deniers are not happy, but that was a forgone conclusion. Anything less than proof that Phil Jones and CRU manipulated the data and that man-made climate change is a myth and a fraud was guaranteed to make deniers unhappy.

6 thoughts on “Climategate: the scandal that wasn’t”