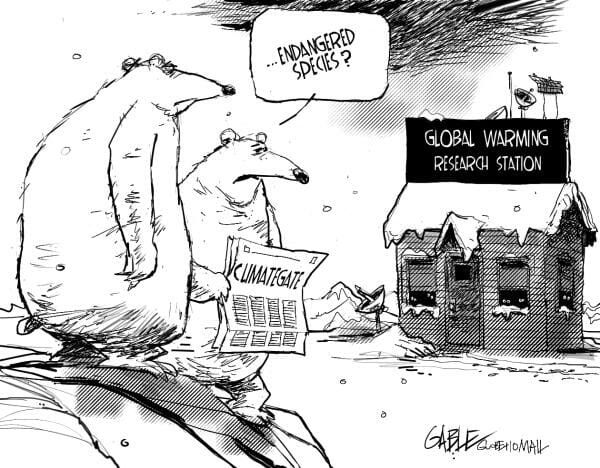 Remember back during the Bush years when climate scientists were being muzzled? Well it is still happening. Not in the US, but rather here in Canada by the Harper Conservatives:

Since 2007 Environment Canada, has required senior federal scientists to seek permission from the government prior to giving interviews, often requiring them to get approval from supervisors of written responses to the questions submitted by journalists before any interview.

“Many [federal climate change] scientists are recognized experts in their field, have received media training, and have successfully carried out media interviews for many years,” said the document, leaked by an Environment Canada employee who asked not to be named.

“Our scientists are very frustrated with the new process. They feel the intent of the policy is to prevent them from speaking to media…. There is a widespread perception among Canadian media that our scientists have been ‘muzzled’ by the media relations policy,”

The leaked document came to light through research done by the Climate Action Network for a scathing report on the laundry list of restrictions on climate researchers since the Harper regime came to power.

This policy is absurd. Government scientists should be free to speak to the media, especially in areas where they are experts. As David Schindler from the University of Alberta makes clear:

As a former public servant, I have experienced first-hand the attempts by federal bureaucrats to silence their senior scientists on matters that they believe might cast federal ministers or official government positions in an unfavorable light. Such muzzling occurred under Conservative and Liberal administrations, at least as far back as the Mulroney government.

Political muzzling of scientists is largely responsible for the demise of the cod fishery, and has played an important part in the decline of salmon stocks in western rivers. It has weakened policies for control of environmental problems ranging from environmental contaminants to endangered species.

It is one of the reasons why I, and many other scientists, left the federal government for universities, where we can speak publicly about our scientific findings without penalties.

I continue to collaborate closely with fellow scientists in several federal departments, including Environment Canada, Fisheries and Oceans, Parks Canada, and occasionally others. My colleagues in these departments have reported increased restrictions on them in the past two years, similar to those described in the news story.

It is clear that muzzling under the Harper government is the most oppressive in the history of federal government science. Incredibly, some of the most eminent scientists in Canada have been forbidden to speak publicly on scientific matters where they are recognized as world experts, ranging from climate change to pollution of lakes and rivers. Instead, the public is referred to media-savvy spin doctors, who usually know very little about the science of these topics, spouting the party line.

This is not a trivial matter. The taxpayers pay the salaries and research expenses of federal scientists, and it is we who should benefit directly from the knowledge that they produce, not politicians and spin doctors who wish to shape our minds and federal policies in a science vacuum. Only a well-informed electorate can make decisions that are well grounded in both science and the needs of a democratic society.

We must demand the immediate repeal of political muzzling policies that prevent government scientists from communicating directly with Canadian citizens or the media on matters of national and international importance.

And even more absurd:

Canadian scientists have told IPS they required permission from the prime minister’s communications office to comment on their own studies made public in scientific journals and reports.

If permission is granted, it requires written questions submitted in advance and often replies by scientists have to go through a vetting process. Within six months, reporters stopped calling and media coverage declined, the leaked report noted.

This policy is detrimental to the public, and should be opposed by all all Canadians, even conservatives. True conservatives should be outraged that their tax dollars are being spent, and subsequently wasted by ensuring that anything learned isn’t put to good use.

And if that wasn’t enough funding for climate science in Canada has also taken a drastic hit:

In its budget [earlier this month], the Harper government provided no new money for the Canadian Foundation for Climate and Atmosphere Sciences. The foundation is the country’s main fund for scientists studying everything from global climate models, to the melting of polar ice and frequency of Arctic storms, to prairie droughts and shrinking Rocky Mountain glaciers.

For many in the research community, the budget decision merely confirmed the view that Prime Minister Stephen Harper and his government remain skeptical of climate-change science and hostile to those who provide evidence that aggressive action must be taken to avert catastrophic global warming.

“It’s quite clear we have a government that says they believe this is an issue but really don’t care about it,” said Andrew Weaver, a world-renowned climatologist from the University of Victoria.

“It’s quite clear by their actions with [the climate foundation] and its lack of funding that they’re basically saying, ‘We don’t want your science any more.’”

The foundation was endowed with $110-million nearly 10 years ago under the former Liberal government, but will run out of money by early 2011. As a result, scientists must wind up their projects.

“There is nowhere to apply for more money,” said James Drummond, a Dalhousie University physicist who is principal investigator for the PEARL project.

Environment Minister Jim Prentice insists the government remains committed to basic research on climate change. He said the foundation has been operating for 10 years and it is now time to assess its work.

Prentice’s excuse is absurd. It doesn’t even make any sense. One doesn’t shut down (which is costly), conduct a review and then if the review goes well start up again (which is even more costly). Once conducts a review while the operation is running, and if it is deemed an acceptable use of tax dollars (which in my books it is) then more funding is granted. Unless of course one isn’t interested in ensuring tax dollars are wisely spent, but rather in shutting down science that goes against the party ideology. In which case it makes perfect sense, and is completely indefensible.

There are many non anthropogenic global warming related reasons that a deep understanding of climate is important.

Canada’s arctic is changing fast. Understanding this change is vital to ensure we can adapt and benefit from it, also many regions in Canada have water supply issues (the parries in particular), understanding climate trends (be they natural or anthropogenic) is vital in ensuring our water supply and infrastructure meet our needs. And There are countless more examples.

These reasons necessitate an understanding of climate (especially at the regional level), and the Conservative policy on the matter is ensuring that there will be a data deficit, which will undoubtedly lead to bad policy.

Not to mention that as the funding dries up, the country’s capacity to make use of the oft-touted High Arctic research station station will be lost. Thus more tax dollars will be wasted.

As press release by the Canadian Foundation for Climate and Atmosphere Sciences makes clear:

In less than 12 months, major research collaborations among industry, government laboratories and universities will collapse – and with them the jobs of numerous scientists, students and technicians. The country is already bleeding talent…Without sound scientific information, how will the government evaluate the effectiveness of green technologies, or build northern infrastructure, or develop our energy industry, or assure water supply and clean air?

None of this is acceptable. It reeks of a government who says one thing, while doing another as secretly as possible. All Canadians should stand up against such irresponsibility, especially now when the case for global warming has never been stronger.

Only partisans will find this behaviour excusable.