By now it is all over the internet, and I am late getting to it. But it is still worth mentioning. Apparently some people are offended by the fact that Al Gore called the bullshit coming from deniers exactly what it is: Bullshit.

The model they’re using in that effort was transported whole cloth into the climate debate [from the Tobacco debate]. And some of the exact same people — I can go down a list of their names — are involved in this. And so what do they do? They pay pseudo-scientists to pretend to be scientists to put out the message: “This climate thing, it’s nonsense. Man-made CO2 doesn’t trap heat. It may be volcanoes.” Bullshit! “It may be sun spots.” Bullshit! “It’s not getting warmer.” Bullshit!

There are about ten other memes out there. When you go and talk to any audience about climate, you hear them washing back at you the same crap over and over and over again. They have polluted this — There’s no longer a shared reality on an issue like climate even though the very existence of our civilization is threatened. People have no idea! And yet our ability to actually come to a shared reality that emphasizes that this matters — It’s no longer acceptable in mixed company, meaning bipartisan company, to use the goddamn word “climate.” They have polluted it to the point where we cannot possibly come to an agreement on it.

So Gore was absolutely right to call this bullshit. And while one can nitpick and claim that the word bullshit is language unbecoming a former vice-president, that doesn’t make Gore wrong.

But Al Gore’s statement of the obvious is shocking to many. It is shocking because the ideas that Gore rightly calls bullshit are frequently portrayed as legitimate on TV and in Newspapers and magazines. These ideas that have been thoroughly debunked are presented as the other side in a debate that long ago was settled scientifically. 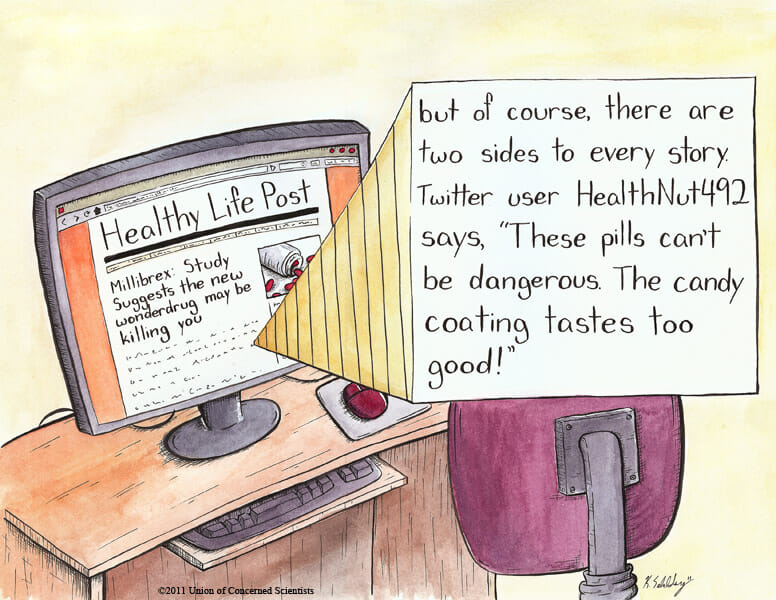 This is a large part of the reason why the public opinion of climate change differs so drastically from the scientific opinion.

In fact recently an independent review of the BBC, commissioned by the BBC, recommended:

For at least three years, the climate change deniers have been marginal to the scientific debate but somehow they continued to find a place on the airwaves. Their ability so to do suggests that an over‐diligent search for due impartiality – or for a controversy – continue to hinder the objective reporting of a scientific story even when the internal statements of the BBC suggest that no controversy exists. There is a contrast between the clear demands for due impartiality in the BBC’s written guidelines and what sometimes emerges on air.

This is exactly the problem, far too often the media decides to give both sides of the story. One side from qualified experts who have devoted their professional lives to understanding the issue, and the other side from unqualified cranks.

Their views are given undue attention simply by including them as a legitimate other side. They are given legitimacy whenever they are not called what they truly are. Bullshit.