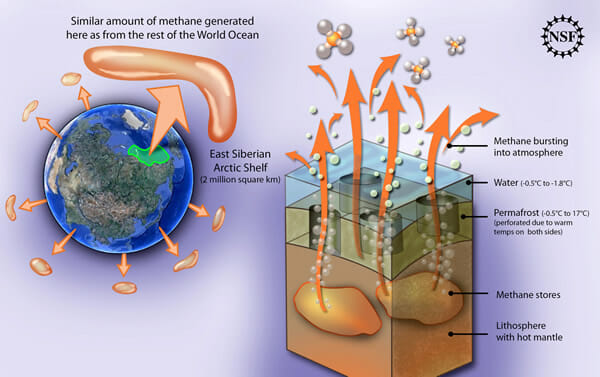 A section of the Arctic Ocean seafloor that holds vast stores of frozen methane is showing signs of instability and widespread venting of the powerful greenhouse gas, according to the findings of an international research team led by University of Alaska Fairbanks scientists Natalia Shakhova and Igor Semiletov.

The research results, published in the March 5 edition of the journal Science, show that the permafrost under the East Siberian Arctic Shelf, long thought to be an impermeable barrier sealing in methane, is perforated and is leaking large amounts of methane into the atmosphere. Release of even a fraction of the methane stored in the shelf could trigger abrupt climate warming.

“The amount of methane currently coming out of the East Siberian Arctic Shelf is comparable to the amount coming out of the entire world’s oceans,” said Shakhova, a researcher at UAF’s International Arctic Research Center. “Subsea permafrost is losing its ability to be an impermeable cap.”

Methane is a much stronger GHG than CO2. 25 times as stronger on a 100 year time horizon, but 72 times as strong over 20 years. And climate models do not take into account this positive feedback.  And this isn’t the first study to demonstrate the escaping methane:

British and German scientists have discovered 250 plumes of methane gas rising from the thawing seabed off the Spitsbergen archipelago in the Norwegian Arctic, apparently a result of the warming of the West Spitsbergen current.

But this study is even more troubling:

The East Siberian Arctic Shelf, in addition to holding large stores of frozen methane, is more of a concern because it is so shallow. In deep water, methane gas oxidizes into carbon dioxide before it reaches the surface. In the shallows of the East Siberian Arctic Shelf, methane simply doesn’t have enough time to oxidize, which means more of it escapes into the atmosphere. That, combined with the sheer amount of methane in the region, could add a previously uncalculated variable to climate models.

“The release to the atmosphere of only one percent of the methane assumed to be stored in shallow hydrate deposits might alter the current atmospheric burden of methane up to 3 to 4 times,” Shakhova said. “The climatic consequences of this are hard to predict.”

Definitely worrisome, if not yet catastrophic:

How important are these fluxes in the global methane cycle? Considering the global emissions of ~440 Tg C as methane per year, the Siberian Arctic Ocean emissions and the changes in northern wetland emissions are negligible. This is good news, implying that current climate change does not affect the natural methane cycle in a globally important way. But will this persist into the future under sustained warming trends? We do not know.

So I’ll end the same way I ended my last post on methane escaping from the arctic:

given the uncertainty associated with the release of methane from the sea floor, at least we can hope that we’re no worse off than we already knew.

Hardly comforting. Clearly there is a rather urgent need to better understand the methane cycle.

UPDATE: RealClimate has a very interesting post on the subject of methane, and its implications for our climate:

Could this be the first modest sprout of what will grow into a huge carbon feedback in the future? It is possible, but two things should be kept in mind. One is that there’s no reason to fixate on methane in particular. Methane is a transient gas in the atmosphere, while CO2 essentially accumulates in the atmosphere / ocean carbon cycle, so in the end the climate forcing from the accumulating CO2 that methane oxidizes into may be as important as the transient concentration of methane itself. The other thing to remember is that there’s no reason to fixate on methane hydrates in particular, as opposed to the carbon stored in peats in Arctic permafrosts for example. Peats take time to degrade but hydrate also takes time to melt, limited by heat transport. They don’t generally explode instantaneously.

For methane to be a game-changer in the future of Earth’s climate, it would have to degas to the atmosphere catastrophically, on a time scale that is faster than the decadal lifetime of methane in the air. So far no one has seen or proposed a mechanism to make that happen.

Their conclusion is reassuring (hey I thought the people at Real Climate were supposed to be alarmist!), and that makes me think that the tone of my post (particularly the line ‘definitely worrisome, if not yet catastrophic’) is too dramatic in tone, though not actually inaccurate.

And for that I want to apologize.