Michael Tobis has elaborated on what his illustration of the climate change debate means. 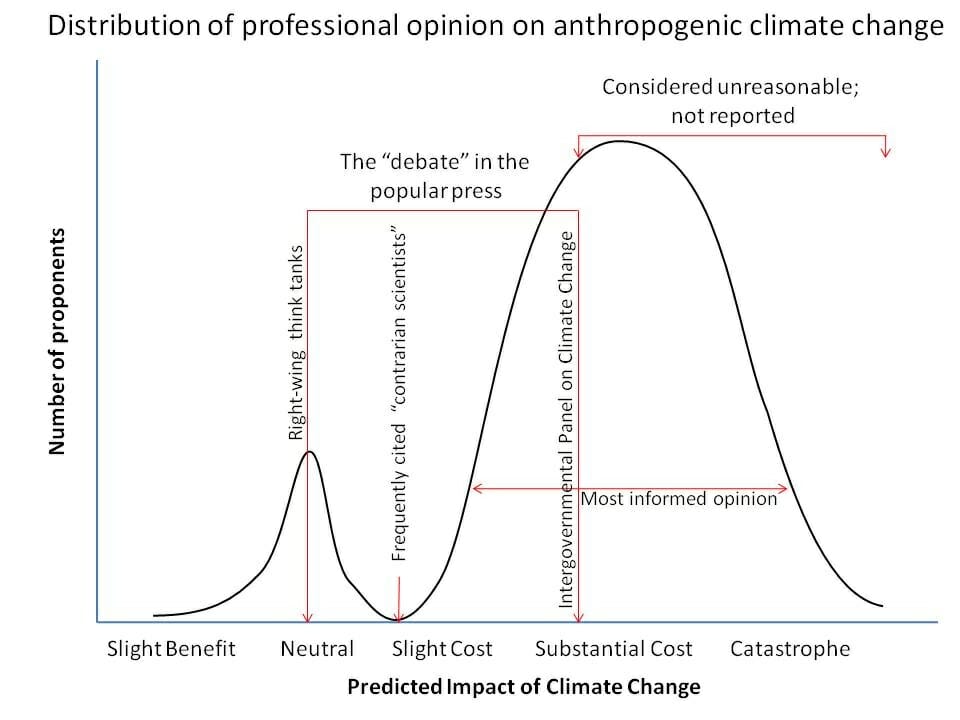 So what does this two hump structure mean? If there were no malice involved, a two-humped opinion spectrum would mean there is an alternative theory, either ascendant or in decline, to the mainstream. There would be, in such a case, no consensus. But in the present case, we discover to our astonishment that the much broader mainstream hump has a much more coherent set of beliefs about how the system works. It is the narrower, smaller hump that contains a vast plethora of competing hypotheses. That is to say, the smaller hump doesn’t represent a position, but simply the union of a very large array of positions agreed on only one thing.

By creating this debate they keep the increasingly shallow and lazy press occupied whenever they wander onto this turf, which is rarely enough. Consequently, the real risk spectrum remains invisible to the public.

The trouble is the masquerade. By approaching as reasonable colleagues, the bad guys appeal to our fundamental strength/weakness. Our interest in challenging ourselves in pursuit of truth is wasted on people whose challenge is not dedicated to us but to the peanut gallery; whose acceptance of our challenges is likewise. We find ourselves wasting enormous amounts of time on pretend science.

This leaves us with two very big questions.

How can we protect science from this sort of attack? That is a very big question indeed, but it is trivial compared to the second one.

How can we protect society from this sort of scientific charade? That’s the gigantic, crucial one. Without reliable communication channels between science and society, any modern society has a very poor prognosis.

I first wrote about this illustration here.